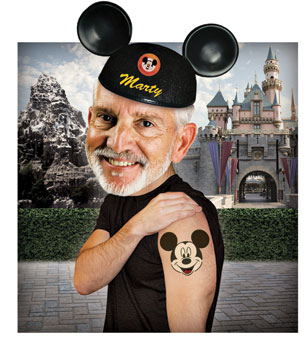 There’s no bigger fan of Walt Disney’s handiwork than yours truly, which helps explain this month’s exuberant cover story [“Secrets of Disneyland,” Page 78]. I’ve lived for almost 30 years within a short drive of the man’s signature theme park, and have witnessed its magic through the eyes of my own kids and others sporting the same delighted smiles.

But I’ll admit that the undiluted zeal of Disney devotees has given me pause—twice. The first time was in the late 1980s, when I was granted access to Disney’s private apartment above the Main Street firehouse. The small space was crowded with antique-y Americana, and it was easy to imagine Walt on opening day in 1955, looking down from its window at the joy he’d conjured from the Orange County dirt. But then my guide leaned in close: “You know, they left his razor on the bathroom sink for years, right where it was the day he died.”

I don’t know if it’s true. She did say it, though, and that alone verges on weird.

The second time, a friend in the park’s publicity office showed me something she thought remarkable. It was a file, labeled “Mickey Markings,” stuffed with letters from people all over the country who’d sent photographs of the familiar three-circle silhouette of Mickey Mouse’s head as it occurred randomly in nature, including a snapshot of a Mickey birthmark on a Michigan baby’s dimpled butt; Mickey plain as day in the belly fur of a Pennsylvania piglet and on the ribcage of a Texas longhorn; Mickey-shaped potato chips and tomatoes, ginger roots and barnacle clusters, cactuses and coffee stains.

While I may not understand it, I get it. There is a weird magic to the place, and nearly 60 years on, we’re proud to reveal a few more of the secrets that help keep it alive in Anaheim.