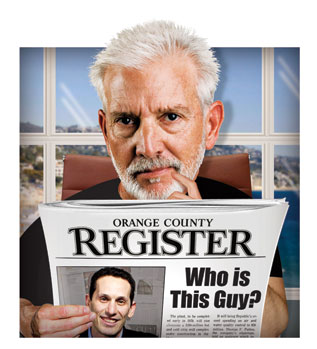 Journalists—the good ones, anyway—trust no one, at least not until they’ve conducted what I call the “full proctological”—a thorough background check. When a reporter asks you to correctly spell your name, it’s not simply because they want to be accurate, but because it’s critical to spell it properly when searching civil and criminal court indexes, incorporation papers, bankruptcy filings, and other public records that might support or undercut your claims. (“So you say you love your mother? Great! Now, spell her name.”) Which is what makes writing about Aaron Kushner so confounding. (“The Curious Quest of Aaron Quixote”) The new owner of the Orange County Register is a cipher. Likable, but as cagey as a pool hustler. What’s he done before? Hard to say. His two previous businesses—the ones from which he reportedly made millions—were privately held, so there’s no public record of finances. We’re told they were vastly successful, but we don’t really know.

Same with his purchase of our homegrown newspaper. We’re told Kushner paid “a lot,” and that his investor group has the money and the will to fulfill his ambitions to make the Register great. So far the group has invested heavily to improve quality, but in truth, we don’t really know if all that will pay off—and won’t until his unorthodox, counterintuitive plan to refloat the Titanic either works, or doesn’t.

Of course, Kushner’s not obligated to share his finances with anyone but the IRS. But for those of us who care about theRegister’s fate, buying into Kushner’s vision requires overlooking many questions about his background, his business plan, and the frenzied pace of change since his arrival last July. We hope he is what he says he is. We hope his ideas work. We hope the skeptics are wrong. So we wait, not sure if what we’re seeing is real, or a mirage. That so many of us have suspended disbelief speaks not only to the desperate state of the newspaper industry, but to our fervent wish for his success.