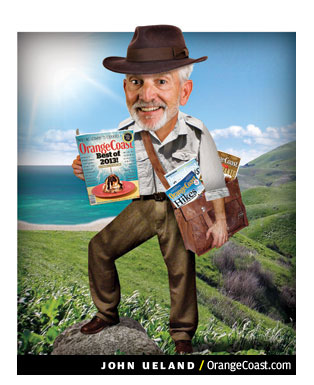 I moved with my wife to South County a few months ago to begin a new phase of life. Our kids had flown, and the 4,500-square-foot coop where we’d raised them was starting to feel like a blimp hangar. So we held the mother of all garage sales, divested ourselves of the detritus of three decades together, and set off for the unexplored South County frontier.

I realize this makes me sound like a shill, but for the first time, I began using Orange Coast as a treasure map for daily choices—about where to live, eat, shop, buy produce, and spend lazy weekend afternoons. True, I’ve edited the magazine for nearly 10 of the last 20 years, and am proud that the print edition and orangecoast.com have become reliable guides for so many readers. But never before have I used Orange Coast so intensely to make decisions about where to spend our suddenly disposable income.

Without Gretchen Kurz’s review in February 2012, I may never have discovered the crust at Newport Beach’s Pizzeria Mozza, a sample of which should be preserved as one of civilization’s landmark achievements; without the magazine’s preview in February, I may have skipped the extraordinary Richard Jackson retrospective at the Orange County Museum of Art; without October’s “Great Hikes” cover story, I might have left the trails of Aliso and Wood Canyons Wilderness Park unexplored.

So as we unveil this month’s “Best of 2013” issue, I’m more keenly aware than ever of the importance of making Orange Coast the county’s most reliable and credible source of information and perspective on local dining, culture, and recreation. Our editorial team works hard—year-round and mostly undercover—to ferret out great experiences for our readers. We take that mission seriously, even if it involves exposing the entire staff to the risk of sugar shock to find the best examples of new wave s’mores.

We hope you find plenty of useful surprises in this year’s compendium. But I can’t imagine how you could enjoy reading it more than we enjoyed the research.