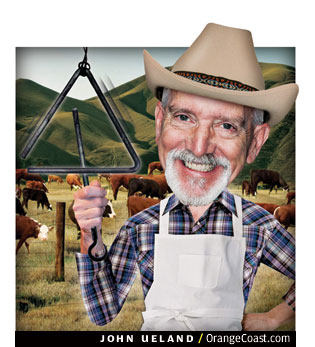 Rancher Frank Fitzpatrick recently invited me for beef tacos, bone-broth chili, and beer. He’s lived in his Silverado house since he was 4, except when he was studying animal science in college and running his grass-fed herd in points north.

Driving into the canyon reminded me just how much of Orange County still feels like the old West, an image Fitzpatrick reinforced when he picked up a glowing ember that tumbled from his fireplace and tossed it back into the flames—barehanded.

These days, Fitzpatrick grazes his cattle overlooking Orange County housing tracts, and sells his artisan 5 Bar Beef at local farmers markets, which has made him an unlikely celebrity among local foodies. As we ate, he preached the gospel of holistic ranching, described in uncomfortable detail the true content of most fast-food burgers, and revealed the delightful fact that his alpha bull services about 85 of his 115 cows during the summer breeding season.

A moment of impressed silence, please, for Frank’s alpha bull.

Writer Shawn Hubler tells the story of O.C.’s “Uncommon Cowman,” and you can check back to find more images of him by Pulitzer Prize-winning photographer Rick Rickman at orangecoast.com. Keep Fitzpatrick in mind when you read “What to Eat Now!”, because many of the county’s best chefs rely on local producers to create menu marvels, and in doing so they support Fitzpatrick and people like him who have made the conscious choice to feed us in the most responsible and sustainable ways. In an age of factory farming and genetically modified food, he sells peace of mind.