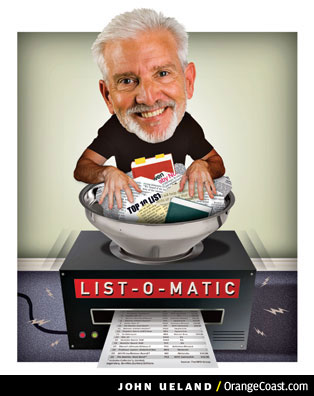 I’m an obsessive list-maker whose iPhone includes, at this very moment, lists for “Christmas Gift Ideas,” “Artists to Buy,” and “Favorite Takeout Dinner Orders.”
So yeah, I’m that guy.

Even though lists are the crudest imaginable tools for organizing the universe, their sheer simplicity proves irresistible time and again. “The Book of Lists,” a fat, seemingly random catalog that includes everything from “9 Body Parts You Didn’t Know Had Names” to “17 Famous People Who Were Expelled From School,” was first published 36 years ago and spawned a series of spinoff books that continue to sell briskly around the world. David Letterman still is milking his Top Ten lists for laughs. And our fascination continues into the digital age; the business model of BuzzFeed.com is built almost entirely around lists (“40 Signs You Went to Berkeley”).

Assuming the public appetite for lists is as strong as ever, we created this month’s “O.C. Book of Lists,” includes everything from the Orange Coast covers we most regret, to the county’s biggest tax deadbeats, to our most notable architectural wonders and eyesores. Managing Editor Jim Walters produced the cover package and already is urging a sequel, because the opportunity to create informative and entertaining lists seems endless.

Lists remind us that life can be quantified, correlated, and set down in tidy numbers and words that help make the chaos swirling around us seem somehow understandable, if not manageable. Lists are calming, Prozac for the soul.

So let me tempt you deeper into this issue with yet another list: 5 Surprising Local Realities you’ll discover in the pages that follow:

UC Irvine, where nearly half the student body is of Asian ancestry, has become a hotbed of hip-hop dance.

Outside of Santa Ana once stood a “farm” that was a federal eavesdropping operation.

Two of the finest restaurateurs in Orange County hail from … Ireland?

South Coast Repertory soon will stage a production of Arthur Miller’s “Death of a Salesman”—with an African-American cast.

See what I mean? Irresistible.