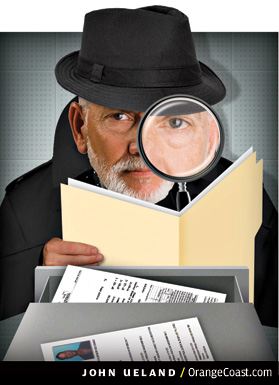 To an editor, a story such as “Center of the Universe” by Jay Roberts is compelling—and incredibly frightening.

Compelling, because Roberts’ claim to have once been seduced by Orange County’s most notorious serial killer offers a rare and chilling glimpse into a merciless mind, and it goes a long way toward answering a persistent question: How could this killer, Randy Kraft, render his victims so vulnerable, especially when so many were combat-ready U.S. Marines?

But such a story also frightens me, because one man’s account of what happened in a San Clemente motel three decades ago is impossible to verify. Kraft, who for a quarter-century has been on death row at San Quentin, isn’t talking. He hasn’t replied to either letter Roberts sent him while writing the story. And we were unable to locate the photograph that Roberts says Kraft took of him that day.

Without independent confirmation from Kraft, and aware of recent magazine fiascoes and near-fiascoes in which story subjects made up elaborate tales about themselves, we set out to verify as many facts about Roberts’ account as possible—even claims about his life that do not appear in the story.

Bottom line: I believe him. Military discharge documents confirm he was, in fact, a rifle expert with the 1st Battalion, 9th Marines, stationed at Camp Pendleton in spring 1980, when he says this incident occurred. In addition, other public records confirm that Roberts was born when he says he was, and lived where he says he has lived. His claims about his education and career check out. We couldn’t pin down the motel he describes—trust us, we tried—but we accept that it all could have happened the way he says it did.

Affirming all this squares with my basic instinct about human nature. Someone fictionalizing their life typically portrays themself as somehow heroic, but Roberts tells the story of what may have been the most emotionally and physically vulnerable moment of his life, and he does so with remarkable candor. It’s an unforgettable piece that I’m convinced is true. I urge you to read it and decide for yourself.