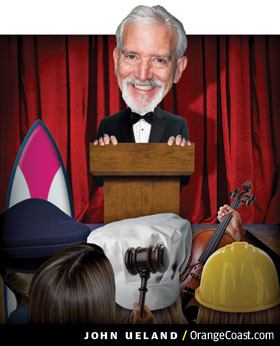 Lindsey Stirling was booted from “America’s Got Talent.” The judges felt the world wasn’t ready for the Santa Ana-born hip-hop violinist whose website describes her as “some strange, electro-pastoral rave fairy.”

The setback four years ago only deepened the 27-year-old musician’s resolve to blaze her own trail, and today—as a YouTube sensation whose first album sold more than 200,000 copies in the U.S. even before she signed with a major record label—she stands as the perfect prototype for the “O.C. Woman” we celebrate in this issue: Talented. Smart. Resilient. Indomitable.

A lot of women we know fit that description, and the 10 we honor this month represent a cross-section of the many possibilities we discussed while vetting the 2014 honorees, which include the county’s top law enforcement official, an arts executive, a surfing phenom, an entrepreneur, a nonprofit’s CEO, an engineer, a restaurateur and author, a judge, and a philanthropist who has a doctorate degree in nutrition and a special interest in healing. We applaud them all, and will let Stirling’s wise words about finding her own path serve as a beacon for candidates in the years to come: “The same reasons I was told I wouldn’t succeed are the reasons people travel hundreds of miles to see me now. Because [I’m] different.”

Speaking of which, we’re betting many of you haven’t yet seen all nine of California’s national parks. It’s time. Beginning on Page 88, we offer five incredible journeys to visit the Golden State’s grandest places, set aside for you and future generations by those who understood how important wilderness would be once the other 38 million of us arrived.