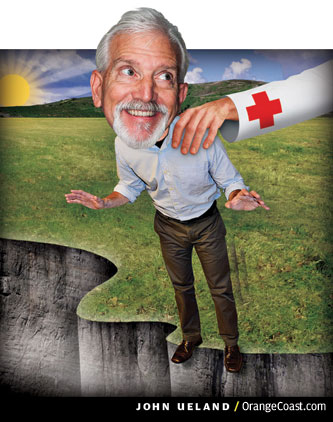 A good friend once had a potentially nasty cancer, a kind many people don’t survive. They caught it early. Now, years after that trauma, he talks about it with improbable humor and mostly in terms of its absurdities, such as the day his mother quietly slipped him some then-illegal marijuana to ease the side effects of chemo.

Not long after, his father also slipped him an illicit packet of weed.

Survivors of medical catastrophes are like that. They possess that refreshing sense of perspective that comes from having been to the edge of the abyss. Those fortunate enough to step back seem to understand not just the fragility of life, but its magic as well.

That’s why our annual cover feature acknowledging the county’s top doctors includes not only the Orange County Medical Association’s carefully considered list of 425 Physicians of Excellence, but also stories about five locals who experienced a medical catastrophe and, with expert medical help, lived to tell the tale. We never fail to be inspired by their stories, and we offer these “How I Survived …” tales each year to give hope to people who find themselves at that same scary precipice.

I’m sure my friend would agree there are easier ways to get perspective in life than facing death. And of course, not all health issues are potentially catastrophic. But it’s nice to know that if you ever do find yourself curling your toes over that scary, scary edge, you’re clearly not alone.