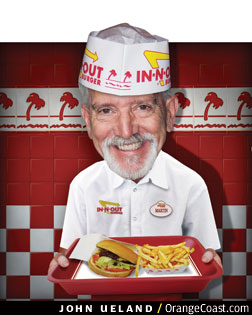 On a recent cross-country flight, I sat beside an Orange County man who operates seven Southern California burger franchises of a major nationwide chain. During our conversation, I mentioned that Orange Coast was preparing a cover story on Lynsi Snyder, the president of his local archrival, Irvine-based In-N-Out Burger.

My seatmate shook his head. “That’s just an amazing company,” he said, and proceeded to offer a few astonishing impressions, including that, even with its limited menu of burgers, fries, soft drinks, and shakes, In-N-Out generates more money per restaurant than McDonald’s does with a menu that extends into breakfasts, salads, fancy coffee drinks, and McNuggets.

Our conversation made me recall another I had a few months earlier with Orange County rancher Frank Fitzpatrick [“The Uncommon Cowman,” December 2013], who raises only grass-fed cattle and dismissed a certain blend of beef patty by saying: “In-N-Out wouldn’t buy it, but McDonald’s would.”

McDonald’s has an amazing success story of its own, so I mean no disrespect. But I’m intrigued by the mission that now falls to the publicity-shy and deeply religious 31-year-old Snyder. She inherited a family business that emphasizes high quality and basic simplicity above all else, because the two generations of Snyders that came before her insisted on doing things their way. As a result, she’s the custodian of a business model that’s increasingly rare in this world—a constant and undiluted commitment to doing the same thing you’ve always done.

How might she handle that mission? We serve up writer Patrick J. Kiger’s story on here.