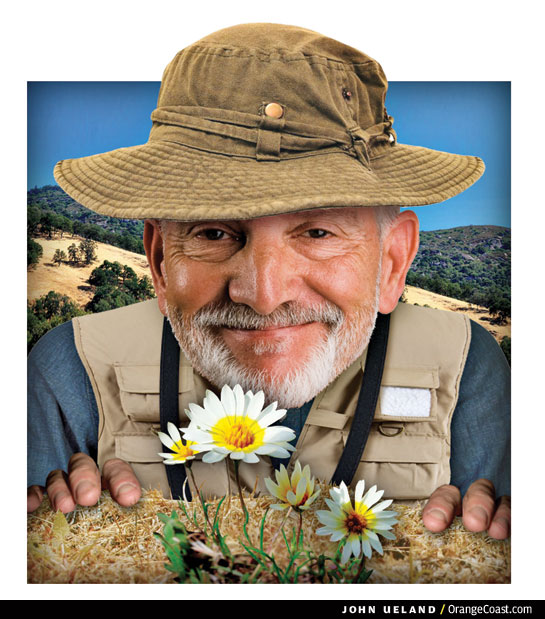 It’s only nine seconds long. Plus, the video was uploaded to YouTube sideways, so you have to tilt your head to the left to watch it. But do yourself a favor. Go to orangecoast.com, find our Web Exclusives page, and click on the link. What you’ll see may be the most joyful nine seconds of your day.

The clip shows Mission Viejo botanist Robert Allen standing on a hill near Modjeska Peak. The co-author of a new and hopelessly obscure guidebook about local wildflowers has just found a rare and endangered plant named the Santiago Peak phacelia. He turns toward his hiking partner’s camera and points down at the flower with a look of pure geeklove ecstasy.

“Only eight living people have seen this plant!” He flashes a thumbs-up.

“And now do your dance,” videographer Reginald Durant says.

And then Allen does a dorky little dance. Think Elaine from “Seinfeld.”

That’s it. But is there anything better than seeing another human experience pure, genuine joy? It’s why we watch the dog pile at the end of each World Series, and why NBC paid $775 million for the right to broadcast the recent Olympics. Scale doesn’t matter. A local nature boy’s ecstatic reaction at the sight of an obscure plant can be every bit as uplifting as watching an underdog set a world record.

The story behind Allen’s moments of triumph, told by writer Karin Klein in “The Nature Nerds”, is one that’s equal parts dedication, perseverance, and eye-opening wonder at the splendor that surrounds us. This month, it’s our privilege to introduce you to his world.