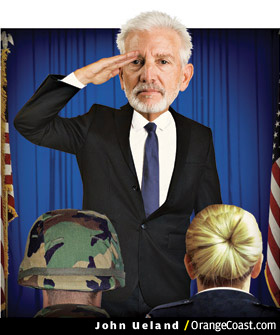 We overuse words like that one, don’t we? An overpaid baller nails a three-pointer at the buzzer to win a crucial game. Gutsy! A politician defies a special interest to do the right thing, and we applaud. Bold! All hail the brave citizen who stands up to city hall!

But let’s get something straight: There are degrees of courage.

C.J. Wilson blowing a fastball past a slugger to shut down a ninth-inning rally will forever be at the low end of that spectrum, along with everyone else whose courage unfolds in the pantomime world of sports. Somewhere in the middle are single parents working two jobs without complaint to feed their kids, and corporate or government whistle-blowers who risk their careers to right egregious wrongs.

But out there on the leading edge—charging dutifully onto treacherous battlefields, or rising valiantly from bed each day after the loss of a child, or standing tall after a grim diagnosis even as their toes curl over the edge of an endless void—are the truly courageous souls who keenly understand the hard truth of mortality, but who carry on.

Orange County Sheriff-Coroner Sandra Hutchens is one of those people. Like you, we watched her step confidently before local news reporters in late November to announce that she has breast cancer, and that she would continue to work as the county’s top law enforcement official while undergoing chemotherapy and radiation treatments. “I’m powering through it,” she said at the time, and we applauded her candor then as we do now.

But once the TV cameras were off and the local media had moved on to the next story, we wanted to understand how she carries on in such a public role even as she endures the therapeutic poisoning of her body. During a 75-minute interview with Orange Coast writer Rachel Powers, the very private sheriff opens up about her daily challenges, an unfamiliar sense of vulnerability, and what she thinks about in her darkest hours. The interview is as remarkable as the woman pictured here and it’s our privilege to publish what I believe is an indisputable profile in courage.