Home Uncategorized A nuclear reactor you can rent by the hour? 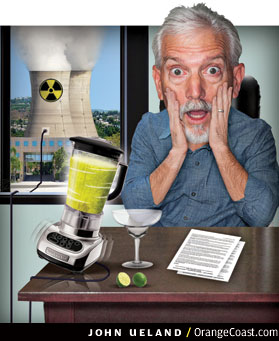 The most surprising of this month’s “Hidden O.C.” discoveries isn’t that UC Irvine is home to the county’s only nuclear reactor, or that the 60-year-old, 250-kilowatt critter sits just a couple of miles from my desk. Unsettling sure, but I’m more surprised that it’s available to rent for $150 an hour.

Who rents a nuclear reactor by the hour?

Our cover story includes less worrisome surprises, of course. We’re thrilled to know we can buy imaginative craft beers such as Imperial Black Espresso Saison and bourbon barrel-aged Belgian ale from an office-park brewery in Orange, and that one of the best Sunday brunch deals in the county is at Fullerton Elks Lodge #1993. And who knew that fans of agricultural oddities can pay homage to the world’s largest plow, which is displayed along Brookhurst Avenue in Westminster?

Senior Editor Laura Bleiberg and lead writer Christopher Smith, who have been chronicling the county for a combined six decades, worked with our contributing writers to unearth dozens of remarkable finds, everything from hidden menus at some of the county’s leading restaurants, to one-of-a-kind museum exhibits, to celebrity gravesites, even one of Adolf Hitler’s touring cars—most of which we knew nothing about until now. We’re sure many of their discoveries will surprise and delight you, too.

Meantime, we’re trying to snag that reactor for bar duty at our next Orange Coast event. Sure, we could plug the blender into a wall socket, but for an extra $150 an hour, why not go nuclear with the margaritas?