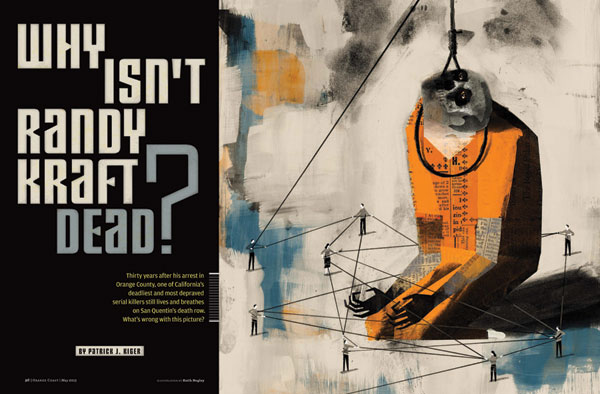 For the full story on Randy Kraft, please click here.

Kraft Sale
Since Randy Kraft infamously kept souvenirs and photos of his victims, there’s a bizarre irony to his own exploitation on the Web by peddlers of serial-killer memorabilia, who offer his letters and other items on various websites. But the proprietor of one site says the market for Kraft memorabilia is slack: “There is no real interest in Randy Kraft items.” Among them:
·      A 2004 Christmas card, in which Kraft advises his correspondent, “Don’t forget to party a little now and then.” $45
·      A 2005 postcard depicting the Balboa Peninsula, which Kraft inscribed with memories of living there in 1969-70. $40
·      “Randy Kraft authentic hair, clipped in February 1994.” This item apparently was peddled by fellow serial killer Lawrence Bittaker, who cleaned up after a death row barber and traded the cuttings to collectors in exchange for pornography and postage stamps. Kraft stopped talking to him when he found out. “Maybe he overreacted a bit,” Bittaker later told an interviewer.  $75
·      A 2007 Christmaspostcard, with the inscription: “So what’s up? I haven’t heard from you lately, and my last couple of letters are unanswered. Please send a line or two when you can …” $40

Your image of serial madmen likely is shaped by made-for-TV movies and true-crime bestsellers. However, FBI experts tell us that most assumptions are wrong.

The related article appeared in the May 2013 issue.