Home 2019 This Los Alamitos Resident Was a Member of Disney’s 2019 All-American College... 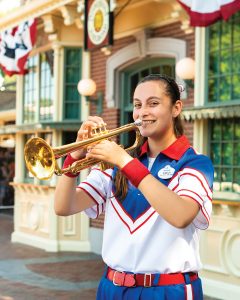 Los Alamitos resident and trumpeter Emily Carpentier was one of 21 college musicians selected to be part of Disneyland’s All-American College Band (presented by Yamaha) over the summer. This year, more than 300 students auditioned nationwide to be part of the annual program.

“My favorite part of the All-American College Band was that everyone was from different parts of the country. We only had this one thing in common to start out, but once we got to know each other, we all just became family.”

“We did a lot of Disney songs, including a Pixar medley and a medley of all the songs at the attractions. We also did songs that aren’t Disney by artists like Earth, Wind, and Fire. But I think my favorite was probably the ‘Aladdin’ medley. I loved performing ‘Prince Ali’ and ‘A Whole New World.’ ”

“When I did marching band, we were on the field and really far away from the audience. We couldn’t really see people up close. But at Disneyland, we’re right in front of the audience. There were little kids smiling when you play to them. It was nice knowing that they’d rather be there and watch us instead of going to a ride or something else.”