On an August day in 1977, when Marie Plata was 12 years old, she went to the beach with her older sister. When they returned to their Huntington Beach home, their father told them their mother had run off with another man.

Their father, an architect, was often angry, prone to violent outbursts, and Marie was afraid to question him. She searched the house for clues and discovered her mother’s purse and driver’s license in the attic, which she found suspicious. Marie was unhappy at home, eventually ran away, and was placed in foster care. In 1988, about a decade after her mother’s disappearance, she decided to contact the police. “I was about to get married and I wanted her to come to the wedding or, at the very least, let her know that I was OK and starting a new life. … I’d been  thinking about my mother a lot. She was pretty terrific. She was involved in Girl Scouts and homework and was a good cook. She was always there for us—until she was gone.”

When Huntington Beach Detective Don Howell began investigating, he figured he’d be able to locate Theresa Baxter. He had her Social Security number and fingerprints on file as a result of a shoplifting arrest in her youth. Howell also was optimistic because of his past successes, including finding eight missing children during his career. Some had been gone a few weeks, others more than a decade. “I worked every angle you could think of,” Howell says. “I followed her bank account. I talked to friends, family, and neighbors. I put out fliers. I did a historical search to see if any law enforcement agencies ran her name for warrants.”

Howell, a stocky man with a neatly trimmed mustache, doesn’t talk about Theresa Baxter with an investigative detachment. Appearing genuinely disappointed that he hasn’t solved the case, he smiles ruefully and pats the two large three-ring binders that chronicle the investigation. “It all came to a big fat zero.”

Early on he suspected Baxter’s husband because of his manner during interviews. “He couldn’t care less. He was kind of sociopathic, like: ‘She’s gone, so what.’ ”
But the detective was hamstrung, investigating a case nearly a decade after the woman disappeared. Baxter’s husband is now dead.

The marriage was troubled, Plata says. She recalls her parents fighting often, and one night her father tried to prevent her mother from taking the children and leaving him. She pulled a gun on him and ran out of the house with her children. Eventually, she returned home.

“I fear that he either killed my mother or had someone else do it,” says Plata, who is now 51. “She wanted to leave him and take the kids. He had a big problem with that.”

While she fears the worst, Plata says she still has hope that her mother might be alive. Every Christmas, Howell sends the grieving daughter a card, and they talk on the phone several times a year. He always lets her know he hasn’t given up. 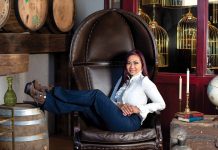