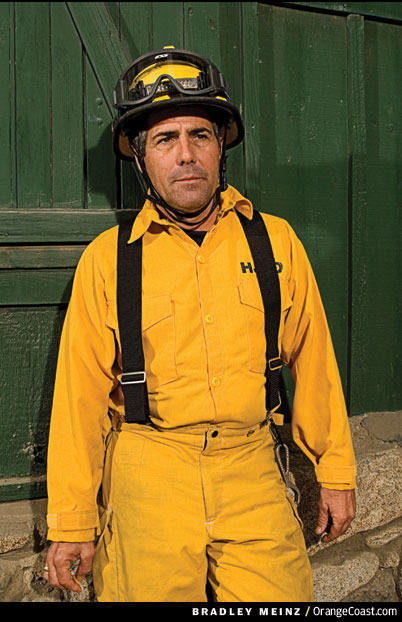 Deep down a narrow, chaparral-choked canyon in the Cleveland National Forest, in a cluster of old cabins without electricity, water services, telephones, or cellphone reception, a dozen willing firefighters prepare each fire season for flames that could come howling over the crest at any time.

They’re Orange County’s only remaining all-volunteer firefighting force, and they’ve signed on to protect a tinderbox—from the inside. Their equipment is antique. Their experience and training are limited. And yet, a fire that gets the upper hand in their canyon could threaten lives in densely populated communities beyond the ridges to places such as Rancho Santa Margarita, Coto de Caza, Dove Canyon, and Ladera Ranch.

Their challenge? To protect a sylvan fissure in the Santa Ana Mountains, a fine little stretch of wilderness that local hikers hold dear, but a place some professional firefighters consider indefensible—rugged Holy Jim Canyon.

Here, the surrounding walls drop steep and hard, turning the canyon into a flue, a fire funnel packed with fuel. There’s only one way out.

The Orange County Fire Authority has a lot of reasons to be nervous this time of year. The Holy Jim firefighters are 12 of them.

They call themselves “The Dirty Dozen.” Operating independently from the Fire Authority, this group of volunteers, whose members’ ages range from 20 to 61, is the first—and perhaps only—defense against fire in this remote part of the county.

While the crew has previously included women, today’s group is a raggedy, whiskered bunch, throwbacks to an old, rural Orange County. They hike, cycle, bike, and ride horses. Some have been enjoying the canyons all their lives. Half own cabins on this land—simple, small, wood-frame or rock structures, many built in the 1920s and leased in 20-year increments by the U.S. Forest Service. Some of the men are real estate agents and business owners; others have unusual professions, such as seal rescuer and farrier.

Despite their varying backgrounds, they all share a passion for Holy Jim.

“When I was a kid, I rode my horse through all these hills,” says 30-year-old volunteer Jake Robinson of Trabuco Canyon. “Back then, Trabuco Creek ran year round. Now it doesn’t get pretty and green till you get up into Holy Jim.”

Robinson, who shoes horses for a living, is studying fire science at Saddleback College and hopes to become a trained firefighter, even though it will mean cutting his farrier earnings in half. Though he has a 4-year-old son, Jesse James, he says he’s prepared to give his life if necessary to save Holy Jim: “I’d rather die here than anywhere else. If I did die doing this, my son would be proud.”

The crew members kick in $20 a month to buy their own ropes, knives, and other supplies, and cabin owners pay $20 a year to help support them. The men sometimes communicate with a whistle system their chief learned during his tour in Vietnam. (One toot means “water on”; two, “water off”; three, “more hose”; four, “escape.”) They alert each other to a fire via an old-fashioned phone tree, though they also get phone and text messages. Their radio is solar-powered.

The volunteers’ workhorse is a six-cylinder 1948 GMC pumper with bosomy fenders, a vehicle they’ve christened “Gertrude.” It isn’t unusual to find bats in the cab. Because the firefighters draw water from streams, tadpoles sometimes get stuck in the fire hoses.

While the Holy Jim Volunteer Fire Department has been around since 1964, the company didn’t get much notice until last October. That’s when the Santiago fire—which authorities blame on an arsonist—blackened 28,400 acres, destroyed 15 homes, and took 21 days to extinguish. Holy Jim was spared, just barely.

While the Holy Jim volunteers say they’re ready, the Orange County Fire Authority doesn’t exactly welcome them because harsh geography could make them a liability. Standing inside the small “firebarn” in the canyon, Holy Jim Fire Chief Mike Milligan points to a topographic map to show how close together the contour lines are—steep 70-degree slopes. “If you look at this map, you see nothing but danger,” says Milligan, a 61-year-old who served in the 101st Airborne Division in Vietnam and owns a cabin in Holy Jim. “It’s not unreasonable to understand that the Fire Authority would protect Santa Margarita and Portola before they want to protect 49 cabins [in Holy Jim canyon]. Are they coming if they’re stretched? No, they’re not coming. And as much as I might be angered by that, I fully understand it.”

Milligan drills his men to hold the line at the base of the hills. Their strategy: Watch the fire crab down the sides of the arroyos—save the cabins—and leave the wildland firefighting to the Fire Authority. Should the worst happen, their only escape is a twisting dirt road up Trabuco Creek, five miles and at least 20 minutes from the nearest pavement. It’s not so much a road as a wash, a rutted kidney-jarring watershed pocked with deep potholes and strewn with stray boulders.

“You have to know that if you go in, it could go bad,” says 49-year-old volunteer Rourke Oakland, a former head of safety and security for America West Airlines. “If you don’t have that understanding, you should never go in.

“This is our canyon. We know how the fire will behave. We’re very confident we have the chutzpah to get the job done.”

Is chutzpah enough? Even Milligan, who feels he knows how fire will behave in the canyon, acknowledges the risk: “You look at the steep hills, the old, old fuel, and the one escape route—you’ve got a five-mile sliver of road going into the middle like a fuse—and now think about anywhere from 13 to 20 fire engines trying to get out of here in a firestorm.”

It’s not a scenario anyone wants to see. Orange County Fire Authority Chief Scott Brown leads Battalion 7, the team that would be called in to fight a fire in Holy Jim, or to rescue any firefighters trapped by the canyon’s flames. He’s torn between the need to protect the county’s more populated areas and a moral obligation as a firefighter to help protect the Holy Jim volunteers.

“We’ve had serious discussions whether we’d commit anything into that canyon. It’s going to be very difficult. It may be we decide not to engage. That’s a decision that plays out in all those communities. They’re very difficult choices, and they’re not made on the fly. But everything is driven by safety … and the resources will be deployed where they’re needed most.”

Brown admires the volunteers’ commitment. “I don’t want to take anything away in terms of their protecting their community. I appreciate it. I value it. They have a good community spirit; they’ve got a pioneer perspective. They’re out there by themselves. That being said … you have liability and safety issues when you have personnel out there without training. All those things combined are things we’re trying to work through.”

Milligan insists his crew has one big advantage over the Fire Authority: The locals know the canyon; they’ve seen how most fires operate in the landscape.

Brown agrees. “Mike has an invaluable library of experience in terms of knowing what the fires are going to do in that area. Local knowledge is really critical to the firefight.” Still, when last October’s blaze threatened to incinerate Holy Jim, the volunteers kept vigil through sleepless nights in the perfect blackness of the canyon, unable to see the approaching flames. Without electricity, they couldn’t even monitor the fire’s progress on TV, unlike Dave and Ladona Rukstalis, who watched the flames approach their cabin near the Holy Jim trailhead on the television in their Mission Viejo home. They jumped in the car to get a better look, but couldn’t get through the roadblocks. They finally found a perch high in Rancho Santa Margarita, on Plano Trabuco Road. Standing on the cliff, they could see the blaze burning one ridge away from Holy Jim.

“The fire was just leaping and shooting flames,” recalls Ladona Rukstalis. “I was sure we were going to lose the cabin. All our plans and dreams and work of the last 25 years. We’ve just worked for years and years on trying to make it habitable. And we’d just finished it. It was heartbreaking.”

Down in the dark dead zone, the firefighters were pretty sure the fire was turning their way when they saw a sheriff’s patrol car bumping up the dirt road toward them.

“If you guys don’t get out now, you’re not getting out,” the deputy told them.

At which point, in the eyes of the Fire Authority, the men of the Holy Jim volunteer fire crew became part of the problem, not the solution. In recent years, firefighters throughout the West have been stretched thin by a wave of wildfires driven by drought and development in fire-prone zones. Statewide, there have been so many massive wildfires that taxpayers paid more than a half-billion dollars in fiscal 2007-08 to fight them, according to the California Department of Finance, up from less than $44 million a decade ago.

While the Dirty Dozen roster holds steady, the number of Orange County volunteer firefighters has dropped, reportedly by more than half, since 2002 when the Fire Authority expressed concerns about the volunteers’ training and response times. About 290 volunteers, along with primarily reserve crews in nearby canyons, now support the county’s approximately 900 full-time firefighters.

When the Santiago fire hit, county fire engines were operating with only three firefighters, one fewer than the voluntary minimum standard established by the National Fire Protection Association. There also were fewer firefighters per capita than in neighboring counties. Orange County fire officials responded in March, appropriating $14.1 million out of existing accounts for increased staffing, including 36 new firefighters and 22 full-time people on hand crew. An additional $24 million was earmarked to buy two water-dropping helicopters to supplement the two Vietnam-era copters still in service.

Unfortunately, it’s not clear how much, if any, of that would be deployed on the Dirty Dozen’s behalf should the worst happen in Holy Jim.

So the county’s loneliest fire crew carries on, preparing the best that it can.

This article originally appeared in the October 2008 issue.