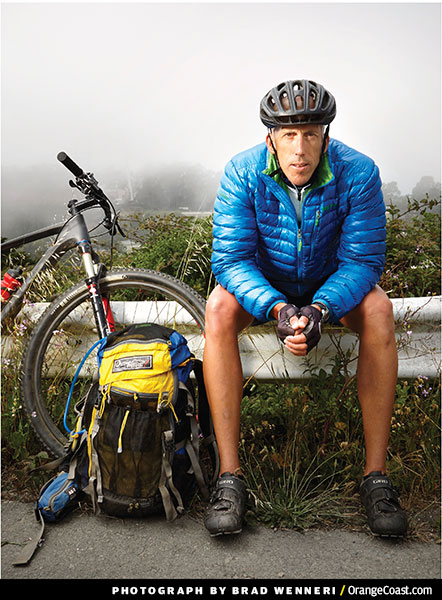 Originally from Cypress, the 45-year-old athlete
has traveled the Earth to compete in a sport known
for challenging multiday races in which teams of four often forgo sleep and safety to run, cycle, and paddle to the finish line. Tubbs and his team placed ninth last year, but this time he’s being tested before the competition even begins .

The 2013 championships, held in Costa Rica, proved brutal for Tubbs’ Team Bones. Expected to last six days, the nearly 550-mile route took nine to complete. One teammate broke three ribs on the first day. Tubbs weathered a foot infection that landed him in a wheelchair after they crossed the finish line.

“We were the only nonsponsored team to make the top 10. We have normal jobs: One teammate is an ER doctor, one runs three banks—and they have families. They decided they couldn’t do the race this year; they need to be home. My other teammate has joined another group; she’s highly sought after since she is a strong woman and you need a female on each team.”

Tubbs, who now lives in the Bay Area, says he can’t quit. He works as a personal trainer and sports therapist, with clients ranging from top athletes to people recovering from illnesses. “I’m always telling them to push themselves. I have to follow my own advice.” He is considering a spot offered by a South African team. They’d have to have a strong showing in one of this year’s qualifier races to compete in the championships in November. But it’s difficult to jump onto a new team—even one he’s acquainted with, having once lived there—when so much of team success depends on trust.

“I love the team aspect of it. You do so much more than you think you are capable of, because you don’t want to let them down. I’ve been out there with crocodiles and charging hippos, and been bitten by poisonous spiders. After a few days, you’re sleep-deprived and you wonder, ‘Why am I doing this? No one forced me—I actually signed myself up!’ But after you finish and get back home you feel so good. It’s addictive.”

“I hear, ‘That’s crazy!’ at least
once a day. People have a hard
time comprehending the sport.
I just tell them to go to a short two-hour adventure race—they have them in California. Once you try it, it’s hard to go back to any other sport. I’m as normal as anyone else; I just have this one aspect of my life where I push the limits.”

Photograph by Brad Wenner
This article originally appeared in the July 2014 issue.