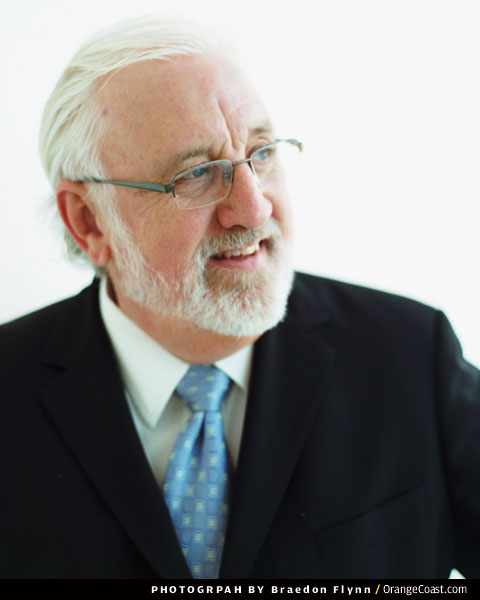 The war stories Corey recites are as wide-ranging as the programming he selects, from Henry Segerstrom conducting the Mormon Tabernacle Choir to concerts by the incomparable Vienna Philharmonic. Corey’s last day with the society is
June 30. The sum of his cultural legacy will last much longer.

“The first full season I programmed was ’95-’96, and that’s probably still my favorite season because it had such a balance. We had [opera star] Cecilia Bartoli, Papa de Lucia, the flamenco guitarist; we had a Korean drumming group, and a Gershwin program, and a tango program. … Today, that’s your playlist on your iPhone. That really put us on the map.”

The Eclectic Orange Festival,  which Corey helped launch in 1999, offered edgier, collaborative works. Among his favorites were “Osvaldo Golijov: La Pasión Según San Marcos” and “Platée” by Mark Morris and the Philharmonia Baroque Orchestra. “The beauty of it was we partnered—we put in our mixture of stuff and the Irvine Barclay Theatre, South Coast Repertory, Laguna Playhouse, Pacific Chorale, they all put in things. It wasn’t like they were putting everything on the line; they were just part of this cluster of crazy people. It made for a great festival.”

The multiyear Beethoven celebration concludes this season. There will be an exhibit at the Bowers Museum, a documentary film screening, and this month’s release of Corey’s book, “Beethoven: The Late Great, 33 Personal Variations.”

“I’ve always loved Beethoven. In his late period, he was completely deaf, his health was terrible, and he chose to write the greatest music of his time; the Ninth Symphony could be argued to be the greatest orchestral piece ever written. There’s a lock of his hair, which will be on exhibit at the Bowers, and they did some DNA testing on it and they discovered it had no trace of laudanum, which was used to kill pain. He bore that terrible pain [cirrhosis of the liver]. He wanted his mind clear, so he sacrificed for that.”

Corey will retire to his home in the south of France, but his influence will be felt for the next few seasons. “Before I flee, we’ll put the ’14-’15 season on sale, and be quite a ways into planning ’15-’16, and a touch into ’16-’17. My successor will look great for at least a couple years.”