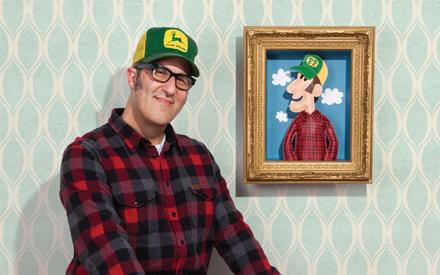 Julius, the iconic sock monkey, is still thriving—as is his creator. But eight years ago, Paul Frank parted ways with the eponymous multimillion-dollar company he co-founded in 1995. His current art-and-accessories line, Park la Fun, marks a return to simpler times for the 45-year-old artist.

“Twenty years ago I went to the first Kustom Kulture show at the Laguna Art Museum. I saw [works by] Robert Williams, Von Dutch, and Ed “Big Daddy” Roth with his custom cars made out of plaster and newspaper. At the time, I was starting to learn how to sew and taking design courses at Orange Coast College. It was enlightening to see the creativity, to see that this was art.

“Now I’m co-curating this show with [surf icon and artist] C.R. Stecyk. We’re hand-selecting what we feel represents the custom car, bike, and surf genre. My hope is that kids especially will see it and understand that art isn’t a chore, it’s a joy.

“Growing up, I always liked to stand out. In my 20s, I wanted to customize my sneakers, so my mother bought me a sewing machine at Costco. Later I made some wallets, and friends all wanted one. That encouraged me and I started to make little bags and backpacks. I’d trade custom wallets for smoothies.

“My grandma used to have this old sock monkey. I guess when she was younger, people would make these monkeys out of red-heeled socks. They weren’t so popular when I was growing up, but my mom and I collected ones we’d see at swap meets. That’s where I got the idea for Julius.

“It’s fun to see counterfeit Paul Frank stuff from China. It’s not right legally, but it is flattering. I was just this Huntington Beach kid still living with my parents, and I never would have guessed someone would copy my designs someday.

“Park la Fun is sort of a continuation of what I was doing before everything was mass-produced. At my old company [Paul Frank Industries], they only wanted to re-use the same characters over and over. Or we’d have a design meeting and someone would say, “We can’t do that.” This is more fun. We only do limited editions, and the same American-made materials that go into my fine-art pieces are in every product.

“It’s a challenge to make the characters come to life and be fun. I always think of the movie “Big” when Tom Hanks is in a toy meeting and asks, “Well, what’s fun about that?” My wife, Susan, is my collaborator and she always pushes me to try harder. I recently designed a bear with a fish in its mouth and she helped me give it a better story. Now the fish has a suitcase.”