Home 2018 Sato Hughes: The Godmother Of The International Surfwear Industry 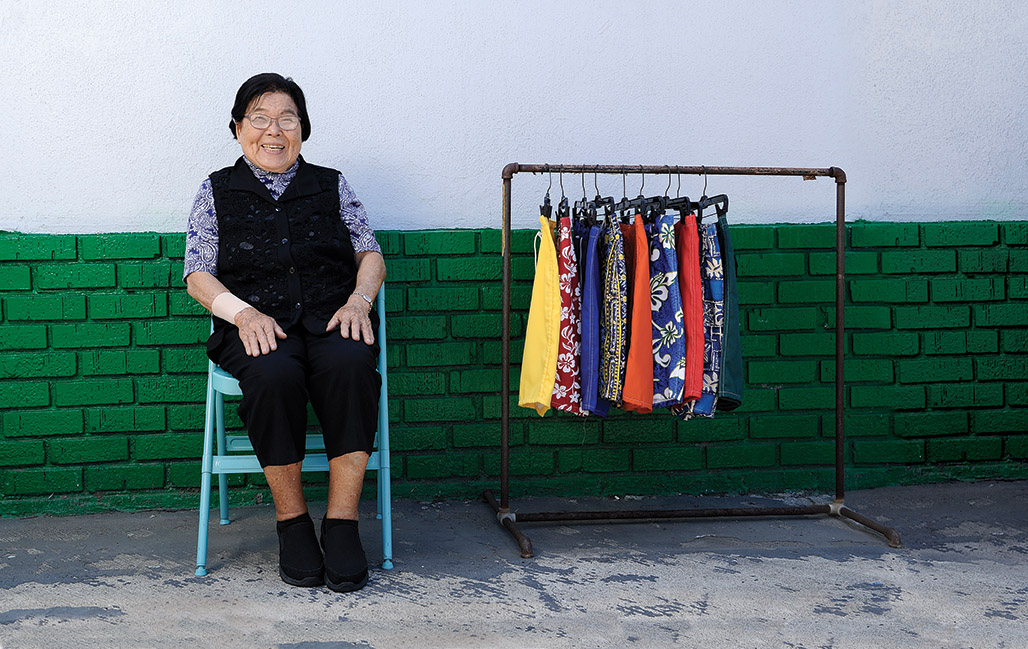 The godmother of the international surfwear industry doesn’t surf. She doesn’t even swim. But she does love the sea, awakening for decades before dawn to hike to the Seal Beach pier from her home in the quaint coastal city.

“I didn’t want to come out for this walk today because it’s raining,” says 90-year-old Sato Hughes, shaking the morning drizzle from her umbrella, which practically covers her 5-foot frame. “But the body wants to go. So I go.”

Hers is one of those “good luck and hard work” stories that feed the Orange County mythos. In 1961, Hughes began as a piecework seamstress for trunks maker Kanvas by Katin in Seal Beach and ended up owning the company. She still considers herself a seamstress, as this is how she spends every workday in the old, wooden structure in Surfside, just north of the Seal Beach water tower. It has been painted shiny white and green for years and feels DIY right from the facade.

“With all these surf lifestyle brands, everyone’s gotta create a story. But we already have a story,” says Mac Beu, 44, a partner in what is now the international Katin brand.

“The story” is not only about a Japanese immigrant who worked her way to success; it’s also about the birth of surfwear as a retail concept—with Kanvas by Katin at the forefront.
The company originally made thick canvas covers for sailboats. In the late 1950s, a young Corky Carroll, who would later become a surfing icon, lived across the street from the business. He dropped by to see owners Nancy and Walter Katin and asked Walter, the sailcover seamster, if he’d consider using the canvas to make a pair of heavy-duty shorts that he could wear surfing. Ordinary swimsuits didn’t survive long in the saltwater, and denim cutoffs weren’t practical, either.

Surfwear as we know it today didn’t exist. Walter Katin took the sailcloth and sewed a heavy pair of shorts. At first they were scratchy and caused rashes. But the Katins further developed the fabric, and many surfers began asking for the new shorts. They also began hanging out at the shop, and many sought advice from Nancy Katin, who became like a mother to them.

The Katins were overwhelmed with orders—there was nothing else on the market like the shorts. But they also had another secret weapon. Her name was Sato, and she routinely came to work early in the day and took fabrics home at night to cut and iron the pieces for the next day.

“They last longer than the person who bought them,” says Dale Rhodes, the company’s vice president of sales.

As the surf trunks idea took off, the Katins realized their business was more profitable in shorts than in sail covers.

A native of Japan, Hughes was working as a seamstress at a dry cleaner, where she met longtime customers the Katins. The Katins had no children, so they showered their love on Hughes’ young son, Glenn, taking the family out fishing on their 88-foot yacht. When he wasn’t out to sea, Glenn fished behind the shop. He still loves it to this day, and last year hooked a 240-pound bluefish tuna near San Clemente Island.

In the 1980s, as Nancy Katin was struggling with emphysema, she told Hughes she wanted to give her the shop.

After Nancy Katin died in 1986, Hughes learned she had inherited the shop: “I was shocked,” she says. By then, Glenn was 26 and driving a truck for a different company. His mother offered him the opportunity to make 25 percent less by working for her until midnight and running the front operation of the shop. In the first year with Glenn on board, sales grew about 25 percent.

It’s still raining when Sato Hughes arrives at the Kanvas by Katin shop just before 9 on a recent morning. Already a surfer is standing at the door, asking if she has time to fit him for a new pair of trunks. Two customers are waiting to buy surfwear. Hughes, wearing her usual black slacks and black tennis shoes with a gray flowered top, cups her nicely coiffed brunette hair and smiles at them sweetly.

Inside, the shop has an appealing smell of sea salt and wet wood. The racks are bursting with colorful surfwear from all the companies that came after Katin: Quiksilver, Roxy, Billabong. At the back, near the restroom, there they are—a long rack of Katin shorts. Sturdy and topstitched, they scream classic.

Hughes walks back to her sewing room, a tiny office overlooking PCH, and fingers three swatches of material beside her sewing machine. She pulls her chair closer to the machine, which is bolted to the floor, and makes a fold on some bright orange fabric. She moves over to an ancient ironing board—the industrial kind with a heavy, wrought-iron base. She steams the fold, then it’s back to the machine, her sun-mottled hands pinning more fabric. Her stitches are straight, though her hands shake slightly. On another ancient looking machine, she throws her whole body into punching the grommets into the shorts. In less than half an hour, the trunks are finished, and she moves on to the next.

“Handmade, one at a time. It’s just not done anymore,” says Glenn Hughes, now 59. “We call her the Machine, he says of his mother. If you were to cut her open, you’d find gears and springs.”

“What am I supposed to do, stay home and watch TV?” his mother asks. “I was born to work.”

Surfer Tony Alvarado, 64, still owns a pair of Hughes-made trunks from the 1960s. “They’re still viable,” he says. “I like to get rid of everything in my life, but I hoard my trunks and my boards.”

Carroll says Sato has made more surf trunks than a hundred people combined. “We have been friends for around 67 years,” he says. “Ever since I was that skinny little kid from across the street who she made so many cool pairs of trunks for.”

Sometimes, surfers wait around at the shop chewing the fat while she finishes the shorts for them. “Surfers are very laid-back,” Glenn says. “But we’re also in the microwave generation, and everybody wants it now.”

Today, the price for a pair of Kanvas by Katin shorts starts at  $62. But customers who want a pair sewn by the pioneer herself pay $95 and show up to choose their fabric and be fitted in person. Pros such as Zack Flores, Shaun Tomson, and Peter “PT” Townend have made the pilgrimage.

As for being the godmother of surfwear, Hughes scoffs. “I’m just an ordinary seamstress.”

Though she loves spending time with her grandson, Marshall, she has no plans to retire.

“I have too many people who want the trunks,” she says. “What else can I do?”

Glenn asks her how she wants to die.

“I want to fall dead on my sewing machine,” she tells him. “Making a pair of trunks for Marshall.”