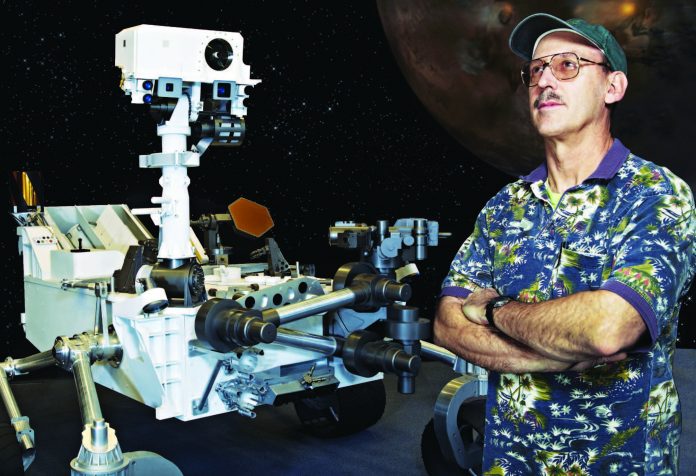 John Wright doesn’t deal with traffic, but not because
he carpools from his home in Seal Beach to his job
at the Jet Propulsion Laboratory in La Cañada-
Flintridge. It’s because the hot rod he’s paid to drive is
one of only two operational vehicles on the planet.

The planet being Mars.

Wright is one of about 16 JPL
engineers charged with driving Curiosity, the latest
and greatest of the six-wheeled vehicles known generically as Mars rovers. “Technically,” he says, “we’re not called ‘rover driver.’ They named the position ‘rover
planner’ so it would sound really boring and nobody would want the
job.” He flashes a wicked grin. “But we’re definitely the rock stars of
the program.”

He doesn’t have to convince me. I’m a sucker for rareand expensive high-performance vehicles, and Curiosity is as exotic as they get. Sure, a top speed of 1.5 inches per
second—which translates into a measly 0.09 mph—may not sound like much. But Curiosity comes with a price tag north of $2.5 billion, and you can’t buy it at a
local showroom. Best of all, it has gone where no man has gone before, which is something a Bugatti Veyron can’t say.

Even before I meet Wright, I’m guessing that driving a Mars rover requires a unique set of aerospace skills. But when Wright comes out to greet me in a leafy
quadrangle on the JPL campus, he’s not what I expect. Instead of wearing the Dockers of a NASA lifer or the blue uniform of an Air Force officer, he’s dressed
in a battered baseball cap and a loud
print shirt billowing over faded blue
jeans. The vibe is less rocket scientist
than Jimmy Buffet parrothead. (Turns
out that he and his wife, Helen, moved to
Seal Beach 16 years ago because they’re avid wind surfers.) But the surprises are
just beginning.

Wright, an ebullient 56, leads me across
the quad to Building 264, and we ride the
elevator to the sixth floor. His ID card gets
us past a security door, and we enter Room
627. As I’d imagined, there’s a whiteboard
full of incomprehensible notations and
lots of giant computer screens twinned
together to provide ever larger viewing
areas. Still, what really catches my attention
is what I don’t see—a joystick to control
Curiosity.

I’d always thought of rovers as superduper
versions of the remote-control offroad-
style models available at local hobby
shops. I figured JPL had a full-motion
simulator accessorized with flat screens
and subwoofers in a high-tech basement
staffed by engineers in lab coats. And I
assumed that drivers here on Earth maneuvered
around in the simulator based on
cool-looking video that was being beamed
across the cosmos.

Wright patiently explains that, depending
on our respective orbits, Mars is
between 34 million and 250 million miles
from Earth. So messages take as long as 20
minutes to get from here to there. “Even
if the delay were just four minutes,” he
tells me, “you’d definitely crash.”

Crashing is not an option when you’re
driving on Mars. You can’t just pick up
the phone and call AAA for a tow, and
you can imagine the insurance paperwork.
Wright is especially sensitive to
this issue because he was at the virtual
controls when one of the previous generation
of Mars rovers, the plucky sixwheeler
known as Spirit, got bogged
down in sand from which it never
escaped. He continues to mourn the
day in 2011 it was pronounced dead after
more than a year of futile rescue efforts.
He still has his “Free Spirit” T-shirt.

Wright joined JPL in 1994 after a stint
writing flight simulation software for
Hughes Aircraft. His flight-sim experience
came in handy when he worked
tangentially on Sojourner, the short-lived
Mars rover of 1997. When the next generation
of rovers—Spirit and Opportunity—
landed in 2003, he began workingas a driver. He continued to drive Opportunity
after Spirit died, but when Curiosity
began rolling around Mars this past
August, Wright transferred to NASA’s
new Mars Science Laboratory team.

Although Wright commonly is referred
to as a driver, he’s more of a programmer
than a chauffeur. Every night, while the
solar-powered rover is asleep, scientists
formulate the next day’s mission—examine
this rock, for example, or gather sand
from that ridge. It’s then up to the drivers
to figure out how to get the rover from
Point A to Point B without any drama.

Wright and his 15 colleagues “drive”
Curiosity by stringing together long series
of commands drawn from a library of
3,200 actions and parameters. To ensure
nothing goes wrong en route, every move
is simulated dozens of times at JPL by
Wright and other drivers wearing 3-D
goggles to optimize their understanding
of the Martian topography. Drivers
also are responsible for manipulating the
rover’s articulated arm, which collects
samples. (The death ray-style laser used
to pulverize rocks is controlled by another
engineering team.)

Because safety is the drivers’ paramount
concern, mission planning is an
exhaustive and time-consuming task. It’s
not uncommon for drivers to spend an
entire day writing commands to move
Curiosity five yards. (To date, no single
jaunt has gone more than 50 or so
yards.) I ask Wright if this ultracautious
approach to driving has any effect on
the way he handles the 2002 Corvette
in which he blasts around Earth. “If anything,
I drive faster now,” he says with a
smile. “It must be my form of rebellion
against all the planning.”

To be honest, piloting Curiosity can be
a chore, sometimes even a bore. And as
Wright likes to joke about Mars: “It’s a lot
of rocks and dirt.”

But after nearly a decade in the Martian
driver’s seat, sitting at the virtual wheel
of three rovers, he still gets a charge out
of exploring the only planet that seems
to be a plausible destination for human
colonization.

“I know I’m never going to Mars,” he
says. “So this is the closest I’ll get to being
there.”