Home Uncategorized Quiz: Is Orange County Worth it? 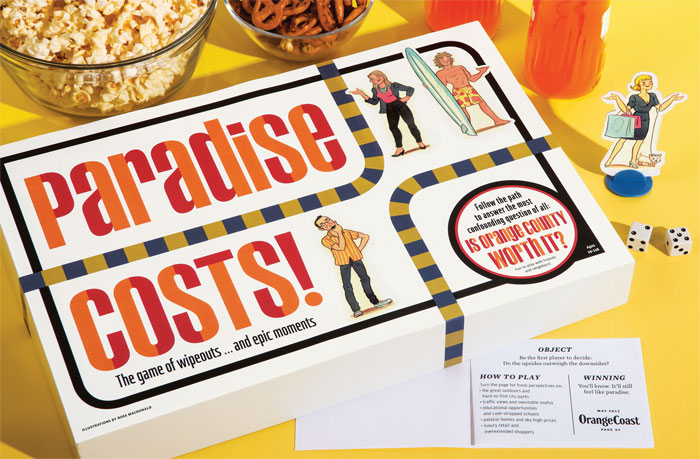 Our cover story this month explores the pros and cons of living in paradise, from wide-open spaces to crowded freeways; from outstanding colleges and universities to cash-strapped schools; from palatial homes to sky-high real estate prices; from luxury retail to overextended shoppers. The package also includes a pop quiz about local school district realities, and you can take that quiz below. For the full feature, buy a print or digital copy of the May issue here.

How much does the mostly stellar reputation of the county’s 28 districts and schools, colleges and universities reflect the reality? Take our pop quiz, then decide.

1. Which high school was ranked No. 1 in California and seventh-best nationally by U.S. News & World Report?
A. Oxford Academy
B. University High School
C. Orange County School for the Arts
Answer: A. Defying the trends, 72 percent of the students at Oxford Academy in Anaheim Union High School District come from homes  where English isn’t the primary language.

4. Each district in the county receives the same base state funding per pupil.
True or False
Answer: False. The current byzantine system of complex formulas leads to massive differences. Laguna Beach Unified, for example, relies primarily on the city’s trove of property taxes, and has  base funding of $12,592 per student. Los Alamitos Unified starts with $5,372 from the state, per pupil. Additional state and federal funds add more to the coffers, but do not erase the inequities.

6. What percentage of O.C. third-graders read at the proficient level or above?
A. 75 percent
B. 55 percent
C. 35 percent
Answer: B. That means nearly half scored below proficient on the state’s 2012 STAR standardized tests.

7. Enrollment in O.C. charter schools has tripled in 10 years, to more than 10,000 pupils. How many of the county’s 28 school districts have them?
A. 4
B. 12
C. 19
Answer: A. Santa Ana Unified and Capistrano Unified both have five charter schools; Orange Unified has two; and Saddleback Valley Unified has one.

8. Foothill High School in North Tustin houses the country’s largest _________ on a high school campus.
A. Gymnasium
B. Recycling center
C. Garden
Answer: B. The recycling program, now in its 17th year, teaches special education students the skills they need to enter the workforce. Five years after leaving the program, 99 percent of them have found employment elsewhere.

9. Which Orange County university has made the largest leap in the U.S. News & World Report’s annual rankings since 1991?
A. Concordia
B. Cal State Fullerton
C. Chapman University
Answer: C. Chapman placed 61st in the western region 22 years ago. In 2013, it was sixth. No other school in the nation has shown such improvement. And it’s being noticed: This year, Chapman received a record number of applications, with 12 students applying for each spot in the 1,000-member freshman class.

Lifestyle
Worth It?
If You Work & Play Hard
Outsiders know the glitzy “Housewives” side of Orange County. But Average Joe and Josephine live here, too. Here’s what they like, and also what they find less appealing.

Katie DeCoup-Crank
24, single, deputy, Orange County Sheriff’s Department
Raised Rancho Santa Margarita
Income $80,000
Upsides “There’s so much to do. You can be at the beach one day and at the mountains the next. There’s always something going on, so you’re never really bored. I love the weather, that’s for sure. There are so many types of people and so many opportunities that you can pretty much get into any field you want.”
Downsides “No matter what time of day you’re driving or where you’re going, there’s always traffic. Everyone seems so busy all the time, and in a hurry. Not a lot of people just stop and enjoy the company of others.”

John McGuinness
46, married with two children, English teacher, Spurgeon Intermediate School, Santa Ana
Lives Santa Ana; raised in Irvine, lived outside the county for eight years, returned in 1994
Income $93,000
Upsides “It’s possible to live here on less money than people think. We are careful. We shop a lot at thrift stores. We enjoy good food, but we cook it at home. I like how Orange County is clean. People care about their neighborhoods. We have progressive dinners and summer parties.”
Downside “Sometimes people have an inferiority complex about Orange County. They don’t feel we have the best restaurants or museums, but I would disagree. We have wonderful art museums in Laguna and Newport, and Santa Ana has the Bowers Museum, which is world-class.”

Erin Holmes
43, single, personal trainer and owner of the Art of Movement, and former dancer with Ballet Pacifica
Lives Newport Beach; in Orange County since 1996
Income Between $50,000 and $75,000
Upsides “I like the beach, the way of life, my neighbors, just the diversity of people. The reason I’ve chosen to stay here is I have my business, which I’ve built since 1997. I wouldn’t start anywhere else unless it was something I really, really wanted. But as far as missing urban life or missing things somewhere else, I think Orange County has everything I want.”
Downsides “The cost of living, the fact that my family is not here. Also, Orange County doesn’t have the same type of hospitality and community that my hometown in Virginia has.”

Nico Florea
37, married, server at Mastro’s Steakhouse, Costa Mesa
Lives Costa Mesa; moved here from Romania 12 years ago
Income $65,000
Upsides “I think it’s a combination of everything: weather, ocean, people. You don’t have the craziness of the city; it’s kind of mellow. It’s a little bit safer than living in L.A. County, and it’s easy to get anywhere. If you want to go to the mountains, if you want to go to Mexico, the ocean—it’s very nice. I do a lot of sports, and I have the canyon, the beach. For outdoor people, it’s very, very good.”
Downsides “The No. 1 thing: It is very expensive to live in Orange County—the rent, buying a house, food is expensive, gas is expensive. I also don’t like the attitude of Costa Mesa toward new businesses. It’s very hard to open one.”

If you have disposable income
A vast aquifer of wealth exists in Orange County, and no one knows this better than the county’s retailers. In general, the retail spending potential per square foot in Orange County is 20 percent greater than the average of the nation’s 54 largest metro areas. And the percentage of high-end malls here—those with a Saks Fifth Avenue, Nordstrom, or Neiman Marcus—is almost four times the national average, according to real estate economist Ryan McCullough with CoStar Group, a commercial real estate information company. Some folks do, indeed, live here to shop, and personal shopper Leslie Christen tells us about them.

Orange County really is emerging as a fashion capital. Along with the retail powerhouses, there are plenty of great coastal boutiques introducing collections from emerging designers. I find everything I need for my clients right here in O.C.

“For my clients who are lucky enough to have large disposable incomes — and there are many women in coastal cities who do—shopping is a sport. They’ll meet with their friends at Fashion Island or South Coast Plaza, have lunch or coffee, and then do some serious power-shopping at least three times a week.

Why I Left
Mary C. McGeachy, communications consultant
Lived part-time in Laguna Niguel for 12 years, moved to West Hollywood in September 2012
I lived much of  my public relations life in New York City, but I’d always dreamed of being bicoastal. I answered a New York Times ad to buy a home in Laguna Niguel in 2000, and Orange County really grew on me. It was beautiful, I drove a convertible, and I had a large French-style home. I made a lot of new friends at local Democratic fundraisers, and enjoyed the weather and beautiful landscape.

But public relations contacts in Orange County began to dry up in the recession, and the Romney-for-president bumper stickers multiplied. The sameness was getting to me, too. I began to think about the opportunities L.A. might offer. Part of the problem is that people don’t have any concept of what Orange County is.

I realized I missed the diversity of a city. I also missed pedestrian life … just walking out the door, going a few blocks to the movies, walking to restaurants. So I moved into a one-bedroom West Hollywood apartment with a rooftop pool.

Why I Returned
Franceskay Allebes, teacher, now a stay-at-home mom
Her family arrived in Mission Viejo from the Bay Area when Allebes was in middle school. She settled in Los Angeles after college in 1984, and moved from there back to Mission Viejo in 1995.
Mission Viejo in the early ’70s was a brand-new planned community with an Olympic-size swimming pool, recreational centers, and a new high school. We were surrounded by orange groves and there was nothing east of Marguerite Parkway. We would get on our bikes, ride deep into the hills, climb giant oaks, and see coyotes. I thought it was so cool.

There are cul-de-sacs, and parks for every quadrant. People think, “My gosh, it’s so planned. It’s so cookie-cutter.” But a planned community means no overhead wires or telephone poles.  There was some culture shock when I returned to Mission Viejo. At first we couldn’t find anything open after 9 p.m. And coming from L.A., my concern was the lack of diversity that others touted about Orange County—that it’s so “white bread.” But there is diversity here now—everywhere.

I thought I would miss urban L.A. But when you’re pushing a stroller, getting kids in and out of the car, and you can’t find a place to park within blocks, you start to think, “OK, I’ll forgo the cafe culture and foreign films, and surround myself with CPKs and Chili’s restaurants.” Because if I do, I can exhale and say, “My family is safe, the schools are amazing, getting around is easy, there’s green space everywhere, and I’m in a community.”
—As told to Rachel Powers

To purchase the full story, or order a print or digital copy of the April 2013 issue, click here.