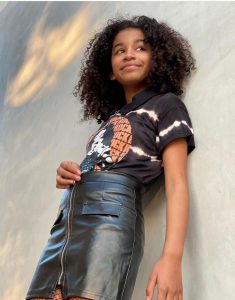 The young actress, who has appeared in Disney Channel’s “Raven’s Home” and the Oscar-winning film “Marriage Story,” plays the on-screen daughter of Caitlin McGee and Sasheer Zamata in the ABC comedy about the relationship between three adult siblings. The series was recently renewed for a second season.

Tell us about your character Shamiah on “Home Economics.”
Shamiah is a super sweet and outgoing girl who fights for social justice, women’s rights, and she’s not afraid to speak her mind.

You started your career as a commercial model. How did you decide that acting was also something you wanted to pursue?
When I was 18 months, I started modeling for Gap and Guess. Then, my parents’ friends encouraged me to film commercials, which led me to beg my parents to move to L.A. to start pursuing acting. They gave in, and I got my first gig which was a Target commercial (which is perfect because I love going to Target for fun.) Then, I landed the role of Savannah in the Disney Channel show, “Bizaardvark.”

What was it like filming “Marriage Story” alongside Scarlett Johansson and Adam Driver?
Working with the both of them was truly one of the best experiences ever. The two are so amazing on set and their energy really brought so much joy to the whole cast. It makes the whole movie outstanding.

You do some voice acting, including an episode of the animated Disney Channel show “Big City Greens.” What brought you to that role?
My friend told me I should audition for the role. So I did, and got it, which was awesome! I also got to sing a super funny song about a community center which was cool. I love voice acting because I get to play all these unique characters.

We heard you’re going to be in a secret Lucasfilm project. Can you give us any hints about that?
It’s really empowering. That’s about all I can say about that!

Watch Her: Catch the season one finale of “Home Economics” Wednesday, May 19, on ABC.