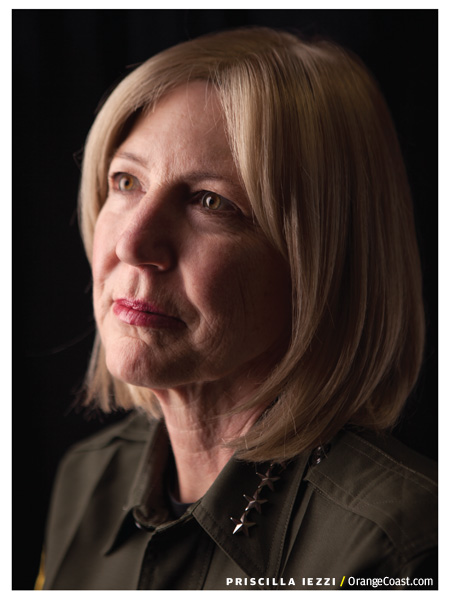 No matter how early it’s discovered, no matter how optimistic the prognosis, a cancer diagnosis fundamentally shifts your world. Alternately tearful, composed, and cheerful, the candid 58-year-old Orange County Sheriff-Coroner Sandra Hutchens reveals the costs and unexpected blessings that come with hearing the words, “You have breast cancer.” And, how afterward, no sunrise, no relationship—or, for that matter, no political battle—can ever be the same. —As told to Rachel Powers

One day I just happened to feel a lump. It was hard, and it was prominent, so it would have been difficult to miss. And I was surprised, because I’d had a mammogram six months prior. It found nothing. I wasn’t aware that you could have a growth six months after you’re cleared on a mammogram, but I’m learning this isn’t unusual. When I had the mammogram, the cancer was microscopic. But by the time I discovered it, it was obvious. I made an appointment, and they did a couple biopsies and found it in my breast and at least one lymph node. I remember when the doctor said, “You have cancer.” It hits you like a ton of bricks. But you get past that initial shock, and then you get a plan of treatment. And once we decided on a plan of treatment, I felt better.

I have a good diagnosis: Stage 3. That was another one of those moments when you say, “What does that mean?” That’s, like, right before Stage 4! The stage is determined by the size of the tumor, and if it’s in a lymph node, it’s Stage 3, period. That’s just the way it is. It’s an estrogen-based cancer, fast-growing. But my doctor said, “I don’t want you to think you’re anybody special. This is garden-variety breast cancer.” And I said, “That’s good. I don’t want to be anybody special when it comes to cancer. I want to have garden-variety breast cancer.”

You hear about people going through chemo and you think, “Gosh, would I pump that poison into my body? Would I do that?” And all of that goes out of your mind when you’re told you have cancer. The next thing out of your mouth is: “Am I going to live? Is it treatable? When do we start?” The first step was a tough round of chemo, then a lumpectomy, then a lighter dose of chemo for 12 weeks, which I’m doing now. Then eight weeks of radiation. I’ll be done with my treatment by the end of July. The first round of chemo was difficult. I called it The Red Death—it’s red in color—and my oncologist laughed and said that every patient gives it a different name. They have to use something called a PICC [peripherally inserted central catheter] line, because if they miss the vein with this chemo, it will burn your skin. It’s that strong. And it just makes you feel terrible.

I was able to go out to lunch after my first treatment, but by the next day nothing sounded good to eat. If I did eat something, I couldn’t think about eating it again. And it’s hard to describe the fatigue. You’re just bone-tired. You also get chemo-brain: You get a little forgetful. Talk to any cancer patient and they will tell you about chemo-brain. Maybe you see someone you’ve known forever and you say their first name, but you can’t remember their last name. And if you wait just a second or two, it comes. It’s not a permanent thing—it goes away. It’s just something that the drugs do to you. This second round of chemo is much, much easier, and I have my appetite back. But I still get fatigued in the afternoon. You feel like you’re a hundred years old, and your muscles are aching, but by the next day you’re OK. There were moments when it was hard, but now it’s a part of me and we’re back to normal, really. People say, “I can’t believe you’re still coming to work.” But I’m just lucky. Some people can’t. It just depends on what kind of chemo you’re getting and how it impacts you. I’m just waiting to get to the end of it. We all know that there’s going to be an end to it.

The oncologist said, “It’s not if you are going to lose your hair. It’s you are going to lose your hair.” And I did, in about three weeks. I’d been shedding, and I had a wig on order. Then, on a Sunday, I washed my hair and it started coming out in clumps, right on the top. All I had was this fringe around the side. And the next day I had to go to a funeral for one of our lieutenants who died of cancer. So I wore a hat. When my wig arrived I just had the rest of my hair shaved off. It’s starting to come back a bit, but back then I was bald. You get used to the wigs. I’m having fun with them—you never have a bad hair day. You just wash it in the sink, hang it in the shower, and plop it on your head. But here’s where it would have been nice not to be in the public eye: My picture is up all over the place, hanging on the wall in every department. I really don’t want to look too different from my photo, but I do look different, and that’s just the way it is. The things you think are going to be major—they’re not. I thought everybody would know I’m wearing a wig. They don’t. My nails are turning black—that’s another thing that happens—and sometimes they’ll fall off. My oncologist said that for some women it’s a huge deal. Me, I couldn’t care less. They’ll turn black, they’ll come back. I’ll just put some nail polish on.

You really don’t want to go public with something like this. I think I would rather have done it quieter and, you know, personally, but I didn’t feel like I had a choice. I’m in the public eye, and my staff started to see that I was going to the doctor a lot. There were media inquiries and rumors. I told my staff and the department members, and then I did a press conference. It turned out to be a positive thing, because I was able to talk about how it happened to me, and about the importance of mammograms and doing breast self-exams. But it was hard to make the announcement, to tell my command staff, and put out a notice to all the employees. And I said that if I got to a point when I felt the cancer was going to impact my ability to do this job, then I would step down. But it hasn’t. Nothing’s changed, really. I still come to work, I still do those things I normally do. The day-to-day is still the same. And when I did the press conference I made it clear: I’m going to run again for another term [in 2014]. I’m going to start fundraising as soon as I’m done with my treatments. An election is nothing compared to cancer.

I didn’t ever say, “Why me?” I never felt that way, because when I went into chemo the first time, there was a woman … and I thought, “My God, there’s a young woman sitting there, and she’s here to get chemo.” And my heart goes out to someone who might be struggling financially, who doesn’t have the flexibility on the job, and has to care for a child. I don’t have those issues. I feel kind of lucky because I’m not young. I think it would be much more difficult if I were a mom with kids. But I don’t have children. Financially, I’m OK. I’ve got good insurance. My husband and I are fine.

I’ve gotten tremendous support from the community, from my staff. I’ve had people—lovely people—send me hats, blankets, all sorts of things. I have a whole box of cards. It’s touching, overwhelming sometimes. I meet survivors all the time, and those are stories that I love to hear. And I have a great support system. My husband is wonderful. And he makes sure I don’t do too much, because I have a tendency to do that. I’ll feel better and then I start putting more things on my calendar, and I start doing 12- and 14-hour days. And I can’t. I’ve cut back on my public speaking, and I focus on running the Sheriff’s Department, which happens to be going very well right now. And that’s good.

I’ve learned a lot of lessons. I’ve learned vulnerability, humility, and compassion during this process. At first I really didn’t like it when I went to the hospital and they put a wristband on me to be sure they were giving me the right chemo. They check and double-check. But the first couple of times it’s like, “I don’t like this. I don’t want to sit in a wheelchair. I don’t want to be a patient.” When I was told I was a cancer patient, I resisted that label. But you get over it, because you are. And so are a lot of other people who are a lot sicker than me—there are kids going through this. So, you learn humility. You learn compassion from all the people that come out to help you. Vulnerability is the hardest. I’m not good at that. This is a profession where you’re typically helping other people who are vulnerable, and I’m used to being in charge and independent.

I’m a very optimistic person, and I believe that I’m going to come out on the other end of this and I’m going to be fine. I don’t want to die, but at the same time, I’ve come to terms with death. I believe in God, in a higher power, and I don’t get to determine when I go. Somebody said to me, “We’re all dying every day, just at different rates.” I’m a part of that universe. And I think my relationships are deeper and stronger because of that vulnerability. Vulnerability brings people together, and that’s powerful. I appreciate people more, and people sense it. I appreciate everything—the sunrise, the trees, the little things, and every opportunity I have. I appreciate having the chance to be the sheriff and getting to know all these great people, and having the opportunity to work with them and do good things for the county.

They tell you it’s treatable, but they don’t tell you it’s curable. During the day you are up, up, up, but at night, in those dark hours, your mind starts to think, “Well, I could die. It could have spread someplace else, and I could die. I could have a limited number of years.” I don’t think that’s going to happen, but it’s a possibility. You begin to understand that it’s important to treasure every day. This is truly a gift that I did not have before. I’ve always been focused on tomorrow. And now I’m more focused on right now. The little things really are little things, and I don’t really care about them. If I have a little political battle, well, some you lose, some you win. It’s not life and death. My staff will come to me with their hair on fire, and I’ll say: “Did anybody die? Nobody died? Then we can work through it.”

To purchase a print or digital copy of the June 2013 issue, click here.