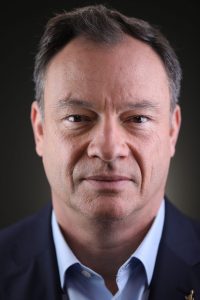 A native of Spain, Michael Lopez-Alegria grew up in the then-unincorporated town of Mission Viejo. After high school, he joined the U.S. Navy, becoming a NASA astronaut in 1992. “My mom lived (in Mission Viejo) until she passed away in 1997, but I’ve been back to Orange County a few times since then, and I’ve driven past the house,” he says.

The view couldn’t have been more different as he “drove by” his hometown and the rest of the globe thousands of times at 5 miles per second in space. “When you see Earth from space, you get a different perspective on life. You don’t see borders. You don’t hear gunshots. You don’t see people hungry or sick. It just looks like a beautiful place, and it makes you think we should be more understanding of one another and not squabble about things.”

Lopez-Alegria experienced that view on three Space Shuttle missions and a seven-month stint on the International Space Station. “The difference between these two types of missions is the difference between a sprint and a marathon. On the shuttle, it’s nonstop. Two weeks, full throttle. You can’t live that way for months on end. So on the ISS, it’s more like working Monday through Friday.”

Another difference is the opportunity to work with other nations on the ISS. Lopez-Alegria, who speaks Spanish and French, also became fluent in Russian while living and working alongside cosmonauts. “We’re all taught to think the way our family or our country does things is the best way, but it’s a privilege to learn from other countries.”

“From up there, you realize how fragile the Earth is. Like a spaceship, it’s a closed system with finite resources.” 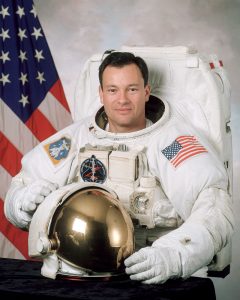 Though he retired from NASA in 2012, Lopez-Alegria still holds the record for the most spacewalks (10) and the second-longest record for time spent outside a spacecraft (nearly 68 hours). “We prepare for spacewalks by having rehearsals in a special swimming pool with a replica of the ISS. You put the suit on and divers help you to be neutrally buoyant, and you feel like you’re in zero gravity. When you do a spacewalk, it’s actually a lot similar.”

Lopez-Alegria describes his upcoming induction into the U.S. Astronaut Hall of Fame as “a great honor.” He and fellow astronauts Pamela Melroy and Scott Kelly were slated to be celebrated at Kennedy Space Center this month.

Since retiring, he has been a passionate supporter of commercial space flight, now working with Axiom Space, a private company that hopes to construct the world’s first commercial space station. “In the history of humanity, a little more than 550 people have been to space. If more people had that experience, I think it would move the needle on the attitude of the entire planet. Right now, it’s extremely expensive, but it was also extremely expensive to fly on a commercial aircraft in the ’20s and ’30s. Hopefully one day it will be affordable and accessible for most people.”

Lopez-Alegria says he’s OK with keeping his feet on solid ground for now. “When I left NASA, I just kind of turned the page like a pro athlete retiring. I was good with that. But if the opportunity were to present itself, I’d go back in a heartbeat. So never say never.”