Where is Main Street Orange County? Not at Disneyland. The uninformed might scoff at the idea of our county, a widespread collection of diverse cities, having an archetypal thoroughfare. But we know better. O.C. doesn’t have one Main Street—we are spoiled with several, each acting as the vibrant hub of its respective town, packed with history yet ever-evolving.

Call it by its nickname, “Mayberry by the Sea,” and locals might roll their eyes. But even they can’t deny that Seal Beach’s Main Street embodies a certain small-town, aw-shucks charm. Stop in at any of the boutiques or cafes along the three-block stretch that runs into the picturesque wooden pier, and the people behind the counter will chat in a neighborly way that will make you feel like a regular.

Maybe that’s because the downtown area feels like it was built for locals, rather than visitors. A post office, hardware store, law office, and insurance agency share the street with shops and restaurants. Weekday or weekend, you’ll see residents feasting on oak-grilled salmon at Walt’s Wharf, lining up for sandwiches and breakfast burritos at Nick’s Deli, and chatting over coffee and pastries on the patio at the sunny, bustling Crema Cafe.

Come Saturday and Sunday, happy tourists seeking a taste of the seaside lifestyle crowd the sidewalks, dipping into stores dedicated to the surf vibe, such as Isabelle’s Cabinet and Coast Modern, or checking out Endless Summer’s unbeatable selection of flip-flops. Next to Nick’s Deli, tucked in the Old Town Gardens, Jennings & Allen offers artisan gifts and home goods. Novelty shops such as Knock Knock and Up Up and Away offer sand toys and kites, all leading people to the town’s ultimate attraction: the beach. 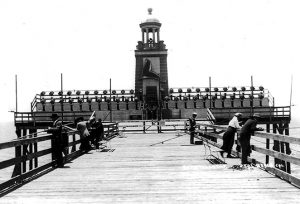 SEAL BEACH PIER
BUILT IN 1906
At 1,835 feet, it’s the longest wooden pier in Orange County. It has suffered structural damage several times over the years, most recently in 2016, when a fire destroyed Ruby’s Diner. 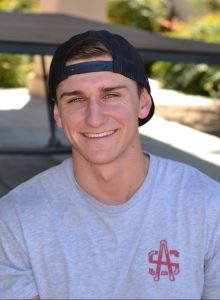 Why bodyboarding is worth a try

It’s a lot easier for people to learn in the beginning. It’s a different way to ride a wave. You can do much more with it.

Best place to have breakfast on Main Street

Old Town Cafe is one of my favorites. I get a little bit of everything: eggs, pancakes, sausage. It’s a pretty small place, but the food is good, and the people are really nice.

Top spot for bodyboarding in town

Definitely the south side (of the pier) in the wintertime. But you probably want to know what you’re doing. It gets pretty hectic sometimes.

You can go up on the pier and see both sides: the surfers on the north side and bodyboarders on the south side. When it’s good in the wintertime, people stand on the berm on the beach. It’s like a little stadium.

It’s the last place around here with a small-town vibe. It’s so quiet compared to anything else and super mellow, with a lot of people supporting the small businesses.