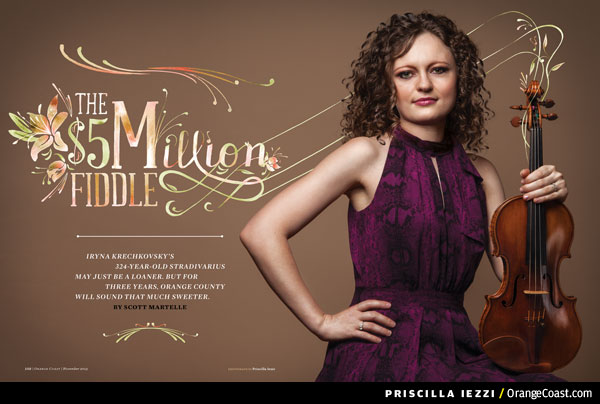 Iryna Krechkovsky looks like a typical grad student waiting in line at the Peet’s coffeehouse near UC Irvine. She  has a purse over her shoulder and  a glossy black
hard-sided instrument backpack. Inside is  a 324-year-old Stradivarius violin worth $5 million. Suddenly, three bucks for an iced tea doesn’t seem all that extravagant.

You’d think walking around with a fortune strapped to your back would be nerve-racking, but Krechkovsky has grown accustomed to it. Ukrainian-born but raised in Canada, Krechkovsky last year was awarded the instrument from a musical competition run by the Canada Council for the Arts’ musical instrument bank, a collection of 19 violins, cellos, and other stringed instruments worth a combined $36 million. She will have the violin through 2015.

For a professional musician, the chance to play a piece of art has an obvious appeal that outweighs worries about being responsible for it. To Krechkovsky, who with her pianist husband, Kevin Kwan Loucks, is an artist-in-residence at UC Irvine’s Claire Trevor School of the Arts, a violin is “an instrument that you have to take care of, whether it’s a Strad or something else. You treat it with a lot of care.”

The violin is known as the 1689 Baumgartner Stradivari, after highly regarded Swiss luthier Fritz Baumgartner Jr., who owned the instrument for a time in the 1960s. Krechkovsky played it briefly during a break in the 2012 Canadian competition, and it was a case of lust at first touch.

“I tried all the instruments, and of course they were all incredible,” she says. “But this one, there was just something about it that I connected to immediately.”

Her own $20,000 violin was made in 2007 by renowned Idaho luthier Ryan Soltis, but Krechkovsky describes it as “limiting” because of its newness. “In the sound there’s so much I wanted to do that I just couldn’t,” she says. “It’s like having a very narrow vocabulary so that you have to operate with a few words. For example, it would go from loud to soft with very little in between.”

The Strad, on the other hand, broadens her range and offers fresh challenges. Cellist Ross Gasworth, who along with Krechkovsky and Loucks is a founding member of the new O.C.-based performing ensemble Trio Céleste, hears the difference.

“Iryna can draw both a very direct, clear sound when she wants to, as well as a more covered, intimate sound when she wants to,” he says. “Many instruments aren’t as versatile, and may lean only toward one end of that spectrum. So with a player like Iryna, you really get to experience all of these possibilities because she has such incredible expressiveness, versatility, and technique. Sometimes you might get one or the other—the player might be good, but the violin can’t accommodate their skill level, or vice versa. But with Iryna and her Strad, it’s the whole package.”

And now any shortcomings Krechkovsky may have no longer can be blamed on the instrument.

“Bach sounds really good,” she says. “We played Mozart and there’s so much clarity. And then romantic music, because it’s incredibly warm, I just—that’s what I loved about this instrument, it’s so responsive to whatever you want to do. It forces you to be better, because when you realize there is no limit, it’s your responsibility to find whatever it is that you weren’t able to do before.”

Still, the first few times playing the Strad left her jittery, and it took a couple of months before she was completely comfortable with it. “It’s better not to think about it, though, because that invites problems,” she says. “It was a little bit scary playing it, and when you feel that way, I think it’s easier to hit [a wrong note] because you’re so paranoid. So I try not to be paranoid about it.”

She is, however, watchful. After collecting drinks inside the coffeehouse, she and Loucks make their way to a table outside, where Krechkovsky tucks the violin behind her on the patio chair, her back holding it in place. During a later photo shoot in the Orange Coast studio, she hovers nearby when it’s placed on the floor for an overhead shot, apparently wary of the heavy camera being positioned above it. At home, Loucks says, “we have our secure hiding places.” But an instrument is meant to be played, and it has to get from home to hall.

Some people are more worried about that transit than others. The violin is insured by the Canada Council for the Arts, but a San Diego concert promoter last spring played up the value of Krechkovsky’s instrument, which in turn made organizers of the free concert a little nervous. Krechkovsky and Loucks arrived to find a hired guard assigned to them. “After the concert he made sure we were in the car,” she says, “and then he left.”

When Krechkovsky won the loan of the Strad last year, she and Loucks already were at UC Irvine, where they hold master classes for students and, through their own nonprofit, Chamber Music OC, arrange performances to build a local chamber music community. The couple met at a 2004 summer music festival in Italy, and married in ’11, forming an unusual double bond first as musicians playing together, and then as lovers.

“We can work together, which sometimes I think with married couples can be tricky,” Krechkovsky says. “We’ve seen it. We have a lot of friends who just refuse to because then it interferes with their personal relationship.”

Krechkovsky and Loucks say the Strad’s arrival has made it much easier to build interest in music programs. Alan Kay, the principal clarinetist of the Orpheus Chamber Orchestra and faculty member at The Juilliard School, will perform with Trio Céleste, and meet with students over the course of several days as part of Chamber Music OC’s outreach efforts. You can imagine a carnival barker: Come see the $5 million Strad, stay for the music.

“In our duo, it’s a third member. In a trio, it’s a fourth member,” Krechkovsky says. “It’s one of a kind. It’s survived through centuries and there’s so much history that goes along with that. I think it’s great. But you know, it doesn’t play by itself.”

A few days later, Krechkovsky and Loucks open the door to a cavernous studio at the Claire Trevor School of the Arts. A Boston baby grand piano—a midmarket instrument made by the legendary Steinway & Sons—stands near the back wall, along with a music stand and a few chairs. Within minutes, Loucks and Krechkovsky are side by side practicing a piece.

The couple speak a secret musicians-only code. “When we have straight eighth notes, bump, bump, bump, or bump, bump, they tend to be pushed a bit and I’m wondering if maybe we can go,” Loucks says, then rips through a few measures on the piano with Krechkovsky quickly following on the violin. The music fills the room, but for Loucks, the sound of the piano is jarring—bright and harsh, compared with the subtle and rich tones of the Strad. “This piano sounds horrible,” Loucks says. But it was good enough for a practice session.

They continue on, leaping ahead in the music to go over passages that one or the other feels needs work. They practice with focused intensity, the bright piano echoing in the room and the Strad filling in underneath, at times sounding, in its maturity, overwhelmed by the piano.

Loucks stops abruptly, but Krechkovsky continues playing. A rich and mournful solo fills the room before she, too, ends with a glance at the neck of the violin. “I hate these strings,” she mutters.

Even a Strad, it seems, can have its limits.

5 Strad Secrets
Theories abound about why Stradivarius violins sound so good, and many focus on the wood. But the spruce top and tiger maple bottom tell only part of the story.

1. Krechkovsky believes a “mini ice age” stunted tree growth at the time Antonio Stradivari (1644-1737) was making instruments in Cremona, Italy, and the wood then and there was especially dense. Alas, a 2012 study disputes that theory.

3. The Strad’s 1689 body is original, and the wood is in remarkably good shape. Krechkovsky says its only flaws are two small cracks on the top, artfully repaired, and a worn spot on the scroll.

4. While the body is original, much of the instrument is not. The neck, pegs, sound post, bridge, fingerboard, and other components have been replaced.

5.  “The scroll is really beautiful,” Krechkovsky says. “If you’re a luthier, you can tell right away it’s a Stradivarius.”