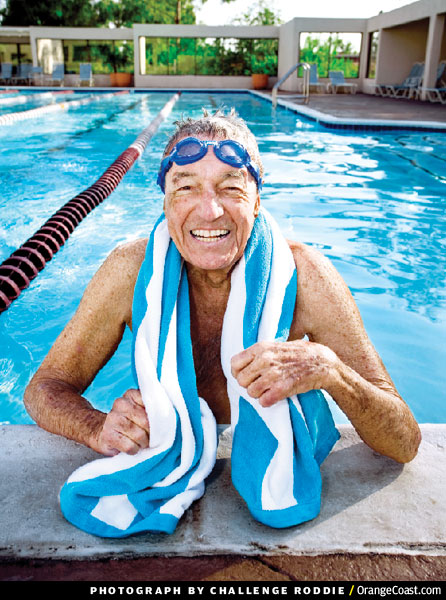 Go ahead, pour yourself that second cuppa joe. As far as the bottle of wine you and your spouse polish off every night, no worries. Heck, pour yourself a nightly gin and tonic. And quit fretting about those extra 10 pounds you just can’t shed.

Sound like the path to an early grave? Guess again. Based on the lifestyle habits and medical histories of about a thousand Laguna Woods retirees pushing 100, drinking moderate amounts of caffeine and alcohol, and carrying a little extra weight, could extend your life.

Findings from The 90+ Study at UC Irvine’s Clinic for Aging Research and Education in Laguna Woods challenge some of the conventional wisdom about health and longevity. Researchers revealed that while certain diet and lifestyle factors might extend life, others—such as drinking green tea—don’t do a thing.

“Everyone does want a magic bullet, but it ain’t one thing. I’m certain of that,” says Dr. Claudia Kawas, the Nichols Clinical Neuroscience chair who is overseeing the study alongside UC Irvine epidemiologist Maria Corrada-Bravo. “I think it’s the whole package.

So far, the five-year, $8 million-to-$10 million study has focused on residents of the former Leisure World retirement community who are at least  90 years old. Participants undergo rigorous tests and monitoring every six months; many have contributed their medical records, their DNA, and even their brains upon death.

Generally, the study results corroborate what health experts have been preaching for decades: Being active and engaged is the best thing you can do to live a long life.

“It’s just scary how good exercise is on every level,” says Kawas, one of the nation’s top geriatric neurologists. “The second thing is nonexercise activities, like socializing, interacting, going on outings, just getting out of the house. … It has a strong effect.”

Fewer than 2 million Americans are older than 90, but there will be 10 million to 12 million of them by midcentury. Their age group is the nation’s fastest-growing—and will be the most costly.

Kawas cautioned that the study explored why participants live a long time, but not their quality of life: “We’ve extended life expectancy 27 years in last century, but all in disabled life. People live longer, but mostly longer with a certain level of disability. Not many people that stay healthy suddenly drop dead.”

Kawas plans to use $7 million in additional grant money from the National Institutes of Health to explore quality-of-life issues. “I think it’s important for people to live long lives,” she says, “but not nearly as important as to live well.”

The good news is that living well may not be as hard as you think. Here are six surprising tips from the study that may help us all live long and prosper.

1. Catch a Buzz
Although many people assume caffeine is harmful, the UC Irvine study found that those who consumed moderate amounts—whether in coffee, black tea, or chocolate—lived longer.

Eugene Bullock is 93 and lives alone in his condo. He prefers his coffee black, and drinks at least six cups a day. However, Bullock doesn’t attribute his longevity to caffeine or anything else he has done.

“I really don’t know why I’m still here,” says Bullock, whose goal is to reach 100. “I just keep moving around.”

Suki Berg, an accomplished 91-year-old artist, attributes her long life to good genes, her passion for painting, and balanced habits. “I’ve always been careful with my diet,” she says. “I’m careful brushing and flossing my teeth. I don’t eat desserts.” When a friend sends her See’s candies, she enjoys them, but she also makes them last for months. “I just don’t indulge myself.”

Berg, whose mother lived to 95, also notes that she “never paid too much attention to studies.”

2. Bottoms Up
Like caffeine, the study also discovered that moderate alcohol intake—whether it was wine or hard liquor—increased longevity. Kawas says one or two drinks a day was found to be protective, although three or more wasn’t helpful.

Jane Whistler, a 94-year-old former nurse who prides herself on her self-sufficient lifestyle, says she enjoys a drink almost every night. “I love wine and the occasional highball,” she says, adding she prefers tea to coffee, loves sweets, and has never paid a lot of attention to her diet. “I eat anything. I’m an RN from a thousand years ago, so I do know how to eat properly.”

Her secret: “I think attitude has an awful lot to do with how you lead your life. I’ve always been that optimistic type of person, half-full instead of half-empty.”

Sue Nadel, a 95-year-old former dancer, social activist, and lifelong vegetarian, says she only started drinking alcohol recently. “I learned to make a martini. Now I have an occasional one before dinner, [maybe] every other day. I’ve got permission from my doctor.”

3. Don’t Count on Vitamins
The study found that vitamins A, C, E, and calcium had no effect on longevity. Nor did drinking green or black tea.

Eva Desca Garnet, a 94-year-old former Ziegfeld Follies dancer in near-perfect health, questions this finding. “Vitamins? I take loads of them. I think they are saying [in the study] there are no effects on life expectancy; however, there might be a lot of good effects on whether you die healthy or die sick. It’s a matter of how you look at it.”

Garnet has written several books on the importance of body and brain fitness in old age, and drives to Laguna Beach each week to teach a related class. She believes “50 percent of the magic bullet is laughter, and the other 50 percent is exercise and diet.”

Garnet is fastidious about her diet, and doesn’t drink caffeine or alcohol—except to celebrate special occasions. “I eat really well.”

Her pragmatic outlook: “There’s always something good in the bad, and something bad in the good.”

4. Pack on a Few Pounds
In contrast to recent reports that calorie restriction prolongs life, the UC Irvine study showed it’s better to be slightly overweight than underweight as one ages, especially once you hit 80.

At 5-foot-1 and just 81 pounds, Eva Garnet finds maintaining extra weight a challenge. She says her slight figure helped her dance into her 80s, although her family and doctor usually urge her to gain weight. “I’m ambivalent. But part of it is I avoid fat, and only eat it in avocados and olive oil. But I eat, I really eat!”

Former champion swimmer Woody Bowersock is 95 and credits his wife, 86-year-old Lousje, with helping him maintain the 150 pounds on his 5-foot-9 frame. He takes loads of vitamins, lives holistically, and sticks to his morning regimen of oatmeal, raisins, a pastry, and instant coffee.

His prescription for a long life, delivered with a wink: “Part of it was picking the right wife, someone who is a good cook and who is as interested in me as I am in me.”

5. Get Off Your Butt
Study participants who showed the best results from exercise worked out 45 minutes a day. Anything longer than that, Kawas says, didn’t mean additional benefits.

Woody Bowersock was afraid of the water until he started swimming at age 12. When arthritis threatened to dry-dock him in his 70s, he hit the pool again and now holds world records for the 50-meter freestyle in the Masters Swimming Program. Today, Bowersock drives a Jaguar, avoids excess medications, and, until a recent leg ailment, swam a mile every day at the community pool. “I’m contented. I’ve been very fortunate. I’m just surprised I’ve lived this long.”

Eugene Bullock, the 93-year-old coffee lover, uses his walker to stroll to the market several times a week. It’s about half a mile away. Bullock adopted his dad’s philosophy while on the high school track team: “Whenever my knee hurt or I had shin splints, he would say, ‘Just walk it out.’ So that’s what I do now with everything, just walk it out.”

6. Get a Life
Sedentary activities, such as reading, crossword puzzles, social engagements, and community involvement, proved just as important as physical exercise in prolonging life.

Jane Whistler, the 94-year-old former nurse, sweeps her patio, waters her roses, cooks her own meals, loves a good mystery novel, enjoys going out to eat with her friends, volunteers once a week at a hospital, and visits her son and daughter-in-law in Oregon every year.

“I don’t fret about my health,” she says. “Hey, I know I haven’t very long to go—well, because no one does at my age. So I just go on and do my daily round of things and have fun.”

Although Suki Berg spends most of her days alone in her studio, she wakes up each morning excited to paint. Her work—six decades of it—was displayed in a retrospective at a Santa Ana art gallery, and, in October, she was named Outstanding Visual Artist of the Year by the Orange County Arts Council.

Sue Nadel, the 95-year-old former dancer, says she recently began sorting through old boxes. “I tell people: ‘I’m in my nostalgia period.’ This is my last period. As an old person, it’s very weird, almost surreal.”

Although she has slowed, Nadel’s only health aid is her eyeglasses, and she recently got her driver’s license renewed for five years. “I tell people to become involved. You know what they say: Learn something new.”

Photographs by Challenge Roddie
This article originally appeared in the May 2014 issue.