In the past year, the Disneyland Resort has celebrated Mickey Mouse’s 90th birthday, injected some much-needed flavor into Downtown Disney, completed Pixar Pier, and created its largest expansion yet—Star Wars: Galaxy’s Edge. We’ve gathered the most worthwhile experiences, new insider tips, and every detail in between to help maximize your visit. Think of it as your field guide to the fun.

Disneyland has its own language for many things. Here’s a quick translation guide for the rest of us.

DRINK WITH A VIEW

KNOW WHEN TO GO

The website isitpacked.com forecasts crowd levels for every day of the year and tracks the hordes in real time. As with any predictions, take these with a grain of salt—but it’s better than going in blind.

Though the front of the castle makes for a classic photo, taking pictures along the paths to the side entrances allows for closer angles and fewer photobombs. Check the hashtag #wallsofdisneyland on Instagram for unique photo locations.

Whether you plan to visit the park once a year or all 365 days, find the package that’s right for you.

Southern California Select
Price: $399
Perks: 10% off select dining and merchandise
Blocked Dates: All weekends, holidays, and peak seasons including summer; some Fridays
Verdict: Only want to go during weekdays? This affordable pass is for you.

Disney Flex
Price: $599
Perks: You can reserve admission for more dates (2 every 30 days); 10% off select dining and merchandise
Blocked Dates: Two weeks around Christmas and New Year’s Day
Verdict: If you want to visit on weekends and in the summer, the $200 upgrade might be worth it. Reservations are limited and subject to availability, though.

Deluxe
Price: $799
Perks: Includes more admission dates (no reservations required); 10% off select dining and merchandise
Blocked Dates: Most of summer, Christmastime, some Fridays and Saturdays at Disneyland
Verdict: This is worth the upgrade from Southern California Select if you like to visit more often. Lack of free parking is a bummer at this price point.

Signature
Price: $1,149
Perks: 15% off select dining and 20% off select merchandise; Free parking (usually $25 a day)
Blocked Dates: Two weeks around Christmas and New Year’s Day
Verdict: Free parking is a huge perk, which makes this a popular choice for passholders. Skip the crowds around the holidays and add the MaxPass feature ($100 for the whole year or $15 per day).

Signature Plus
Price: $1,399
Perks: 15% off select dining and 20% off select merchandise; Free parking; MaxPass (which includes PhotoPass)
Blocked Dates: None
Verdict: Other than being able to attend both parks around Christmas and New Year’s, we can’t justify the $250 upcharge. Save money and purchase the MaxPass add-on for the year.

As the resort honored the iconic mouse this year, we look back at our celebration of his 50th. 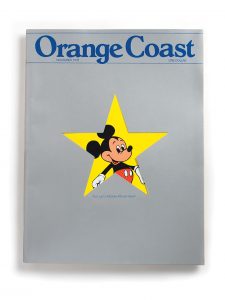 The cover of the November 1978 issue of Orange Coast was dedicated to Mickey Mouse and his 50th birthday. The magazine featured an “interview” with the famous cartoon character in which he described his 1928 debut in “Steamboat Willie,” many of the physical and emotional changes he underwent on his way to midlife, as well as his party plans to celebrate half a century, which included getting a star on the Hollywood Walk of Fame. Mickey probably didn’t realize that his image would end up on every type of souvenir, but the author had an inkling. The final paragraph read: “Many of us reading this article grew up with Mickey Mouse, and it appears our children and grandchildren will be doing the same.” To say the least!

Time your visit with these annual events.

WINTER
Lunar New Year: Celebration through Asian-inspired food and drink, live music, a parade, and free arts and crafts
Candlelight Ceremony: Retelling of the nativity story with a processional, a choir, an orchestra, and a celebrity narrator at the Main Street train station

The Evolution of Sleeping Beauty Castle

How the ‘gateway to Fantasyland’ has changed over more than six decades.

The castle’s design was inspired by Neuschwanstein Castle in Bavaria, Germany, and named “Sleeping Beauty” four years before the animated movie’s release. Forced perspective was used to make the 77-foot castle appear taller. It also featured a working drawbridge and a blue roof that purposefully blended in with the sky.

The Disney family crest was hung above the archway entrance.

To celebrate 50 years, the castle was decorated with a gilded railing and five golden crowns—one for each decade.

2008
After renovations and a long hiatus, the castle was opened to guests. Inside, they ascended winding stone staircases to relive the story of “Sleeping Beauty” through detailed dioramas.

The castle was studded with crystals and draped with royal blue banners to commemorate 60 years.

2019
The castle was unveiled after a months-long refurbishment to reveal cobalt-blue roofs with a sprinkle of pixie dust and a focus on golden accents. Atmospheric perspective was used to heighten the castle with warm pink hues on the bottom and lighter pink hues on the top.

These additions keep the district fresh.

Shop
➜ Sugarboo & Co. is a family-owned boutique full of giftable home goods, including art prints, ceramics, and candles.
➜ From body oils to handmade soaps, the skincare collection from Rinse Bath & Body Co. is all-natural and cruelty-free.
➜ Get retro-style dresses with Disney accents at The Disney Dress Shop and whimsical decor at Disney Home.

Do
➜ The midcentury modern-themed bowling alley Splitsville offers live entertainment and a menu that includes hand-tossed pizzas and chef-inspired dishes.
➜ Experience the latest in virtual-reality technology at The Void, which places you inside the worlds of “Star Wars” and “Wreck-It Ralph.”

Some people come to Disneyland for the rides; others come for the snacks. 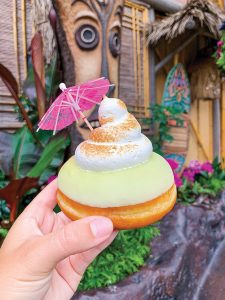 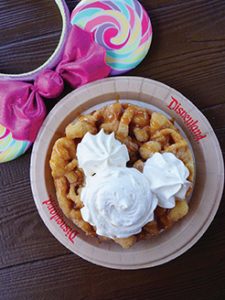 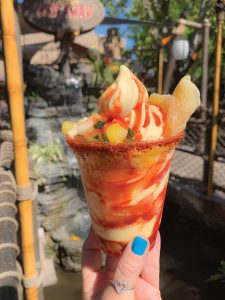 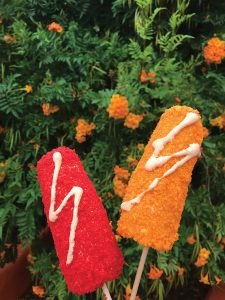 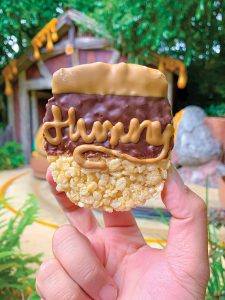