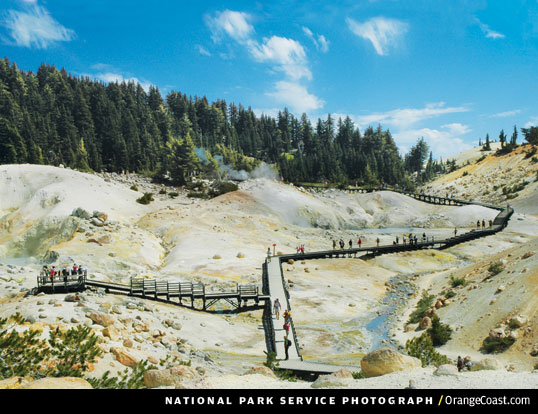 A place of beauty, yet volatile and violent. Among the clear lakes, grazing mule deer, and fields of wildflowers sleep all four types of volcanoes—cinder cones; shields, which spew lava in all directions; composite, which emit lava, ash, cinders, and blocks; and plug domes, whose lava piles up inside the crater. More than 20 years before Lassen Peak last blew its plug, Muir wrote: “Miles of its flanks are reeking and bubbling with hot springs, many of them so boisterous and sulphurous they seem ever ready to become spouting geysers …”

Today, what can’t be seen along the 29-mile highway that clings to mountainsides can be found along 150 miles of hiking trails. One year-round hike (snowshoes available in winter) is a 1½-mile loop around Manzanita Lake, whose clear, cold waters reflect the peaks and pine forests. So peaceful, and so difficult to imagine the day an avalanche tore down the side of a volcanic dome at 100 mph and dammed a creek to create it.

Entry Fee
$10 for a seven-day vehicle permit. Obey the 35-mph speed limit on Route 89 that winds through the park—a rockslide may lie around the next bend.

Hot Tip
Enjoy the mineral springs at Drakesbad Guest Ranch as do its registered guests. “Make a reservation for lunch or dinner,” says Ranger Christopher Bentley. “It’s a great way to relax after a hike.”

Hotter Tip
Stay on the boardwalks at the hydrothermal sites. One misstep could send you plunging through the crust into scalding mud.

Food
You’ll find a small cafe at the Kohm Yah-mah-nee Visitor Center, and food at the Manzanita Lake Camper Store; both operations are seasonal.

Food Nearby
Have a brew and a sandwich ($7 to $11) at R.J.’s in Chester, which houses the 19th century bar and other items from the long-gone Amedee Hotel, once owned by the family of the late jazz great Dave Brubeck. Just eight entrees on the dinner menu ($11 to $22); we recomment the rib-eye.

Fuel
You’ll need a credit card at the park’s only gas station, behind the Manzanita Lake Camper Store; seasonal.

Lodging
The Warner Valley entrance near Chester leads to Drakesbad Guest Ranch at the end of a dirt road. Most of the 19 lodges, cabins, and bungalows don’t have electricity, but all offer heated bathrooms. Take a horseback ride ($50 and up) then relax in the hot mineral-springs pool. $158 to $209, including meals; open June through October.

Nearby Lodging
Seasonal mom-and-pop motels surround the park; big-name chains can be found a 60-minute drive away in Redding and Red Bluff.

Easy Hike
It’s the one hike you can take year-round. Rangers regularly conduct a 1½-mile trek on weekends around Lake Manzanita; snowshoes available in winter. Muskrats splash in and out of their dens along the lake’s edge while hungry bald eagles soar overhead. Fun and informative.

The Big Hike
The 5-mile round-trip hike up Lassen Peak’s south flank is a never-ending series of switchbacks with a 2,000-foot elevation gain. From the northeast summit you’ll see the aptly named Devastated Area. To the northwest you’ll see Mount Shasta, the next dormant volcano up the Cascade range.

Unusual Spot
Fart Gulch, a chalk-colored hillside on the road to Little Hot Springs Valley, is easily identified by its sulfur odor. And aptly named.

Side Trip
Turn north on Boulder Ridge off Route 44 in Shingletown to find Ogburn Ironwood Cemetery, where photographer Benjamin “Frank” Loomis and wife Estealla are buried.

Rare Animals
The bald eagle is the park’s only endangered species; the peregrine falcon was removed from the list in 1999.

Plant Oddity
The wintertime reddish color on the peaks is snow algae. When snow begins to thaw, the microscopic organisms come to life. They’re being studied for their cancer-fighting properties.

Average Temperatures
From 13 to 50 degrees in January, to 40 to 85 degrees in August.

Average Precipitation
From half an inch in July and August, to 6 inches in January and February.

Save the Date
The park’s remoteness makes it a favorite of stargazers who will gather Aug. 1 through 3 for the Dark Sky Festival conducted by NASA, astronomers, and rangers.

Historical Oddity No. 1
Because warnings were heeded, no one was killed during Lassen Peak’s 1914-21 activity. The 1980 eruption of Washington’s Mount St. Helens killed 57.

Historical Oddity No. 2
Peter Lassen (1800-1859), a Danish-American blacksmith, rancher, and prospector, was a guide who used the peak to orient a 12-wagon train from Missouri to the California gold fields in 1848. Some who later followed his “shortcut” through Nevada’s Black Rock Desert paid with their lives. Lassen was shot and killed there while scouting for a silver mine.

Use Redding as Your Gateway
United’s flights out of LAX via San Francisco start at $295 roundtrip. Rent a car at the airport two miles south of town. Keep an eye on the gauge: Gas is 20 to 30 cents a gallon cheaper in Redding and Red Bluff than in outlying areas, and on lonely stretches of state highways—get reacquainted with your high-beams—service stations can be 65 miles apart. Lassen is a gradual one-hour climb to the east on Routes 44 or 36. Redwood is a sobering four-hour trek west through the Klamath Mountains on Route 299; take a crème brulee ($6) break at La Grange Cafe in Weaverville.

Photographs by National Park Service
This article originally appeared in the May 2014 issue. 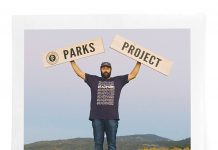 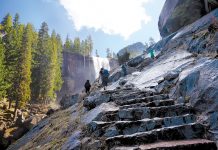 The Irvine Connection: James Irvine and the Redwoods