Home 2017 Jed Cartojano Doesn’t Like the Term ‘Influencer,’ but Half a Million People... 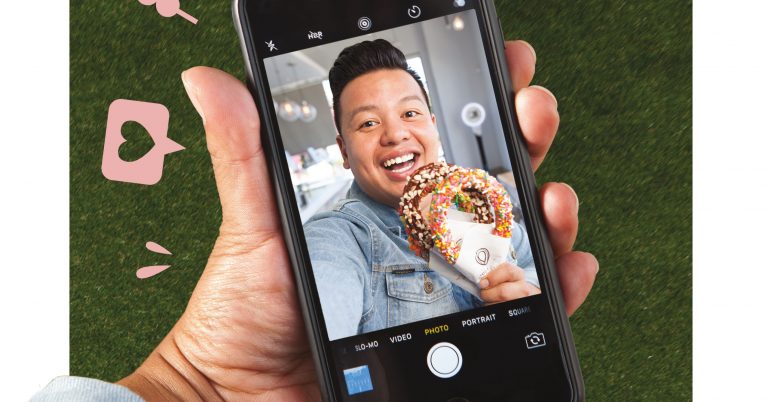 Can’t remember what you did on April Fool’s Day? Jed Cartojano can. He and some fellow bloggers spent four hours creating a Rainbow Drink, which he then posted on his Instagram account Daily Food Feed and attributed to Starbucks. Despite listing butterfly pea tea and mustard as ingredients, many of his followers fell for it.

Daily Food Feed is one of Instagram’s most popular food accounts, with 500,000 followers. Its photos of unusual items such as sushi doughnuts routinely earn more than 20,000 likes.

We caught up with the Huntington Beach resident to find out more about what he does and what we might expect from him in the future.

Several of your Starbucks posts  have gone viral. Among the more recent, you wrote that its Unicorn Frappuccino “SUCKS!!” and “actually tastes horrible.”
I tried it, I didn’t like it. But it goes deeper. I’d previously posted Starbucks secret-menu items and got attacked on Instagram by tons of baristas saying I shouldn’t be (posting) these drinks—that if I or anybody else were to order one, they’d spit in our drinks. If people are saying “I want this Matcha Pink Drink I saw on Daily Food Feed” and they get a negative reaction when they order it, that’s when I feel bad. I wrote in the same post how frustrated I was getting with the Starbucks brand, how I’ve gotten threats from its baristas about putting arsenic in my drinks. I never do negative posts, but in this case, I needed to.

How did Daily Food Feed start?
I wanted to test photos and hashtags for my clients, to see which photos got the most response, the most likes, what hashtags worked best. The point where I thought, “Wow, this could be something,” was exactly 10 weeks in, when it was at 10,000 followers. I wasn’t even taking my own pictures—I was reposting from other accounts. I don’t consider myself a good photographer. I do know what people want to see and what people want to talk about. It just kept growing at an insane rate. What do people want to see?
You can do a great setup, style your food, make it super-clean, even use a big professional camera, and it’s not going to get (much) engagement. Then I’d take a picture of me just holding a juicy burger , no setup, just realism, and get an insane amount of responses.

What do you imagine social media will be like in five to 10 years? 3-D Instagram with smells?
Social media is always changing; there’s always something new. Instagram could be gone in a year—it could be the next MySpace. Right now, it’s moving toward more of a video experience, people knowing your story throughout the day. Actual instant social media, rather than curating an Instagram to make something look beautiful that I ate three days ago.

That three-days-ago style? That’s me!
There are different categories to the Instagram food game. You have the true foodies who just love food and take pictures of food. You have people who do it for notoriety; you have people who want to be popular. I fall into the entrepreneurial category. I use Instagram to create a business and make it successful. Loop is the perfect example. Photos of handcrafted churros  got a great response on Instagram. Now they’re getting a response in real life.

How much time do you devote to Instagram each day?
At least two hours, and that’s just editing. That does not include figuring out what to post and going to take the picture. … On top of that we have our restaurant accounts’ Instagrams.

So four or five hours a day?
On average. To be quite honest, none of this seems like work to me. Even if it weren’t my work, I’d be taking pictures of food, eating and sharing that experience with someone. I’m just so happy to have a large following.

Do you know anyone who has ever stopped Instagramming?
There are some people who have just, you know, gotten over it; they find less and less meaning in it. I hope it doesn’t happen to me one day, but it could. Some people want to abandon all technology and all social media because they have gotten so caught up in it. I’ve found myself caught up in it and have had to take a step back and say, “You know, let’s keep this separate from what real life is.”

Take a step back as in skip a day?
Not necessarily! It’s about being more present in the moment, with what you’re doing, in real relationships. If I’m sitting here having a conversation, I don’t need to be on (social media).

Do you have time to “like” other people’s photos?
Sooooometiiiiimes? Um, yes. Well, yes and no. Being in this, you can’t just think that what you are doing is the only thing going on. And on top of the research part is the real-life sense of things: Are my friends getting married or having kids or getting new puppies?

You recently posted a pic of your new puppy.
I like not being just a food page. I’ve seen other food accounts that are so … sterile. I want there to be a personality behind it. I think people enjoy it a little bit more.

I bet you did research and found out puppy pictures get lots of likes.
Well, that, too! (Laughs) I think he’s the cutest thing ever so I’m going to share it.

McDonald’s fries get likes because they’re attainable?
I love McDonald’s fries—and the rest of the world loves McDonald’s fries. You can talk all the crap you want about McDonald’s, but when you come down to the fries themselves, it’s everybody’s favorite fry. It’s iconic … and everyone has a McDonald’s right around the corner.

Can you define the term “influencer”?
I hate that word myself. It’s so nebulous. In the broadest sense, it is someone with a big following. A person who is able to influence people to do one thing—in this case, to go eat at a certain place.

How big does the following need to be?
You can have a thousand followers and be an influencer. You can have 10,000 followers and be an influencer. If one of my friends is the go-to person who always finds good and interesting things to eat, and I follow them, and they’re posting about it, they’re influencing me. To me, it’s not necessarily numbers. But to everybody else in the world, it does seem to be the number of people who are following you and how much engagement you get.