The noted decorator for Steven Spielberg, Shonda Rhimes, Cindy Crawford, and other luminaries collaborated with President Barack Obama and First Lady Michelle Obama to bring a fresh, youthful ambience to “the People’s House.” His new book documents the eight-year undertaking, from an introduction to the Obamas by their social secretary Desirée Rogers, to asking advice from Nancy Reagan, to decorating the Oval Office, “a no-drama room for a no-drama president.” Smith discusses his design process, what the former first lady calls in her foreword “the magic of Michael—shining a light on the past to bring more life to the present.”

A SIGNATURE STYLE
The thing that people tend to associate me with is updated traditional. I think I’m always interested in a balance between the obvious and the unexpected. You know, to put a modern painting in a traditional room like I did in the White House. Or to use something antique or with patina or texture in a room that is modern. Mixing stuff up a little bit, I think that’s what has worked most successfully for me.

ADMIRATION FOR JACQUELINE KENNEDY
What people don’t really think about is that she put the White House in order. She gave it a serious, scholastic oversight that it didn’t have before. There had never been an overall plan—things were sort of sold at the end of every presidential term, things were put out to public auction. And she went on a huge campaign to try to find, very successfully, all sorts of things that had been thrown to the wind, basically. I think that was incredible. A lot of stuff that you’d think was part of the DNA of the White House, she really created. 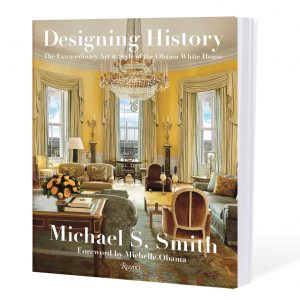 PRIDE IN MALIA AND SASHA’S ROOMS
I think that to work on the girls’ rooms—which are not in magazines or anything, but they are in the book—I think that was really amazing because to take these two girls, who were tiny, tiny girls when they came to the White House and to make the White House kind of habitable, a family house for them, was wonderful. They loved, loved, loved their rooms. They had sleepovers, they did their homework, they had as normal an experience as you could have as a kid, and I think that that’s something I’m super proud of.

AN INCLUSIVE WHITE HOUSE
I really wanted the book to not be political because I think that it’s important that the White House should not be about politics. I don’t know if that’s the current use of it today, but I think that it was super important that at the time, during the eight years (of my work there), everyone was conscious that the White House is not just America’s house, it was all of America’s house. It was functioning in a way that it was intended to, which is really being open to the people, and all sorts of people were going through it, Democrats and Republicans. I think that was a really golden period.