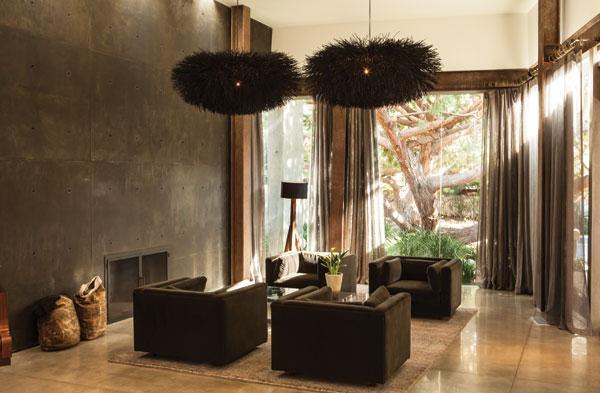 Social trend gurus, Shaheen and Linda Sadeghi are bombarded daily with decisions about art, pattern, and design. “Because of our crazy schedules, it became important that we come home to a quiet, Zen-like environment,” says Shaheen, referring to their ever-evolving Costa Mesa retail properties The Lab and The Camp, and their soon-to-be-fully-unveiled Anaheim Packing District, a 1900s citrus packing house turned eclectic food hall. “We both wanted to visually simplify our lives.”

When their friend Mossimo Giannuli’s former Laguna Beach home came on the market last June, they were thrilled. The Sadeghis, who met as students at Pratt School of Design, always admired the clean lines of the clothing designer’s 20-year-old, two-story modern home, which won Laguna Beach architect Mark Singer an Award of Merit in 1993. The light, space, and soaring ceilings of the concrete-and-steel house, and its verdant triple lot, epitomized the serene environment they had in mind. It was light-years away from the former Tuscan-style Laguna Niguel home where they raised their three sons, but it was in dire need of refreshing.

They replaced the heating and air-conditioning systems and most of the pipes—“all the unromantic mechanical stuff,” Linda says. And they rejiggered the open kitchen area, moving the hooded stove from a side wall to the back wall, installing in its place a 14-foot-wide picture window to frame garden views and flood the room with natural light. Throughout the house, they refinished concrete floors and lightened dark-stained stairs.

Today, linen drapes and textured area rugs warm the space, while the Sadeghis’ soothing cream-and-heather-gray color scheme creates a neutral backdrop. Furnishings, kept to a minimum as part of their “visual cleansing,” are an eclectic mix of organic contemporary, vintage, and one-off artist creations, along with a few pieces from Restoration Hardware. The vast living room is appointed with four box chairs and a glass-top coffee table, which they designed, plus a floor lamp from The Camp’s Seed People’s Market. A piano is one of the few pieces they brought with them from their former home.

The couple are concerned about sustainability, so it’s not surprising they fashioned their platform bed of wood planks and tree stumps, or that a dramatic, 18-foot wood table is the focal point of the atrium. In the formal dining room, they repurposed a metal canopy from a small patio into a dining table, and on the outside wall, they installed a glass door that’s raised by turning industrial-looking wheels on opposite sides. “We have a lot of fun designing furniture … it’s like a practical art,” says Linda, who believes opening a home furnishings store may be in their future. “It’s on our bucket list.”

Perhaps their biggest effort was the garden, full of neglected trees. They hauled away 19 containers of brush and limbs to create an open, tranquil, green space. Today, a new gravel court bordered with Melaleuca trees and indigenous grasses resembles a raked Japanese garden with its soothing, trickling fountain; nearby, a saltwater pool beckons in summer. “We’re out here most evenings,” says Shaheen, who likes to sit on the massive custom teak bench beside the pool, strumming his guitar. “It’s become our informal family room … a place to tune out and relax.”