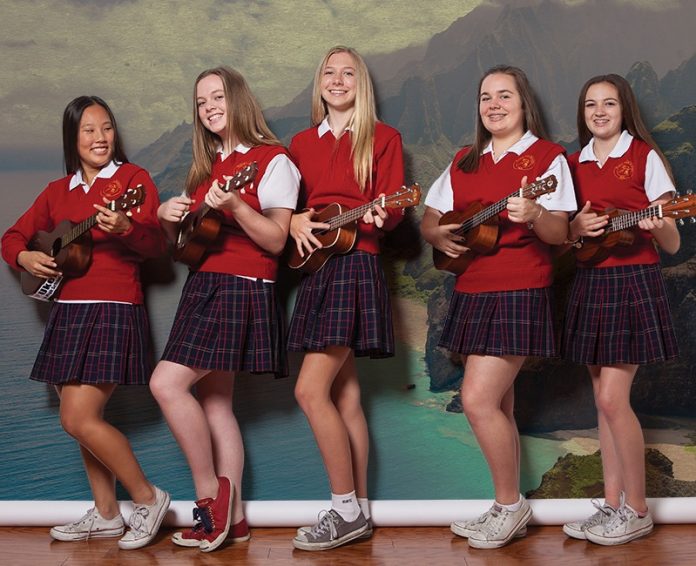 A minor, G, C, and F. The chords to Vance Joy’s “Riptide” are scrawled on the whiteboard. Seven girls sit in a circle and begin to play, laughing when the group goes out of sync. It’s late spring; in a few weeks, school’s out for summer.

Most of the students had never picked up a ukulele before the club formed in the fall of 2014. Faculty advisor Lesley Fulton recruited them, with a sign depicting Uncle Sam saying, “I Want Uke.”
By now, they’ve learned a handful of tunes, everything from “Mele Kalikimaka” to current pop hits.

“It’s the only club where you can play an instrument,” says freshman Lauren Tapia.

In the coming year, the girls plan to get club sweatshirts, perform in a Christmas show, and develop community projects. But for now, they’re content chatting about potlucks, boys, and the odd celebrity encounter.

“A couple of us went to a Meghan Trainor concert and met her afterward,” says freshman Madeline Nye. “We told her about this club, and she told us to follow our dreams. She also said she’d follow us on Instagram, but that didn’t happen!” It’s just a PVC pipe covered with a pool noodle and some duct tape. But it’s also an Elven blade. Or a katana. Or the sword from “The Legend of Zelda.” It depends on the theme of that particular LARP, or Live Action Role Playing game.

“I guess you could say we’re geeks,” says senior Sean Lawless, who founded the club with his twin brother, Zachary. Geeks, sure, even though they’re also both on the varsity football team.

Once a month, they and 40 club members meet at a nearby park. The theme might be something like “Lord of the Rings” or “DC vs. Marvel.” Most players dress up in costume. Weapons range from pool noodle swords to Nerf toys. Then they fight.

“It’s like a sport,” says sophomore Faisal Khammash. “There are two teams and you basically have to kill your opponent. There’s a lot of yelling.”

A chest- or head-shot is an instant kill. A hit to an arm or leg renders that limb useless. Two limbs gone, you’re dead.

It’s clear why the club is so popular. There’s a sense of magic here. Sophomore Ashley Shubin says she and her friends joined after “seeing these guys dressed up with beards. They were like, ‘Hey fair ladies, you wanna go slay some dragons with us?’ ” “Keep Calm and Build a Robot” reads a poster taped to the supply closet door. Inside is a jumble of tools, machines, and spare parts that help Team 4276 do just that. (The team number was assigned by the organizers of the FIRST Robotics Competition, an international event that challenges high school students to create the best bot they can. )

“We learn skills like electrical wiring, computer design, and 3-D modeling,” says sophomore Jordan Murray. “Then in January they announce what the year’s competition will be.”
The “game” can be anything from throwing discs to kicking balls. Teams then have six weeks to design and construct their robots. The past season’s event entailed stacking plastic bins, placing a recycling can on top, and sticking a pool noodle inside the can.

“The competition is a sports-like atmosphere,” says senior Ryan Lefevre. “There’s a playing field, and each team has a coach, two people operating controllers, and one person handling the game pieces.”

All that fun doesn’t come cheaply. The building materials can cost up to $4,000—and that’s not including the tools, training, and entry costs. Fortunately, the team has sponsors such as Boeing, which backs many of the teams across the country.

“Most of us want to go into engineering,” says president Michael Justin, who would love to work at NASA. “This is a great opportunity.” Benson and nine other students meet at lunch every other week to discuss the shows they watch—such as “Death Parade,” “One Piece,” and “Naruto.” Many got into anime by watching series such as

“Pokémon,” one of the first animes aired in the U.S., dubbed in English.
“As we got older, we each found more types of anime,” says freshman president Deva Nguyen. “I realized these cartoons aren’t just for kids. They have interesting plots and characters. The stories are deep.”

Club members have even picked up some Japanese words and phrases from watching the often-subtitled shows. “But we’d never mix them into conversation,” Benson says. “We don’t want to be disrespectful or be seen as poseurs.”

As it is, other students sometimes mock anime enthusiasts.

“One guy in my Spanish class saw my fan art, and he was making fun of me,” says sophomore Matthew Schoepf. “I asked why and he said because the characters’ eyes are too big and it’s weird. That’s not even a reason.”

“I’m glad for this club,” adds freshman Jennifer Jensen. “I finally got to meet people who were interested in the same thing. Ever seen YouTube videos of urban gymnasts running, vaulting over obstacles, and jumping from ledge to ledge? Then you have some idea of what parkour looks like. Developed in France, the sport involves getting from point A to point B in the most efficient way possible. Freerunning is its stylistic cousin, encouraging expression through movement.

“You can’t just take a few lessons and go out there and try to jump off things,” says sophomore Jared Machado. “That’s when you get those ‘epic fail’ videos.”

Though safety is the club’s primary concern (they only practice indoors with crash mats), the tricks, flips, and dives the students have mastered are impressive. Club president Luke Berger and a few others belong to a nearby gym, Firestorm Freerunning Academy. Each week, they pass along everything they’ve learned to fellow students who study in the school’s conservatories, from fine arts to theater to dance.

“I’m a dancer, and it’s definitely helped with core strength,” says senior Emily Relph. “And it’s the only sport on campus.”