Home Uncategorized The Happy Return of the Friendly Diva 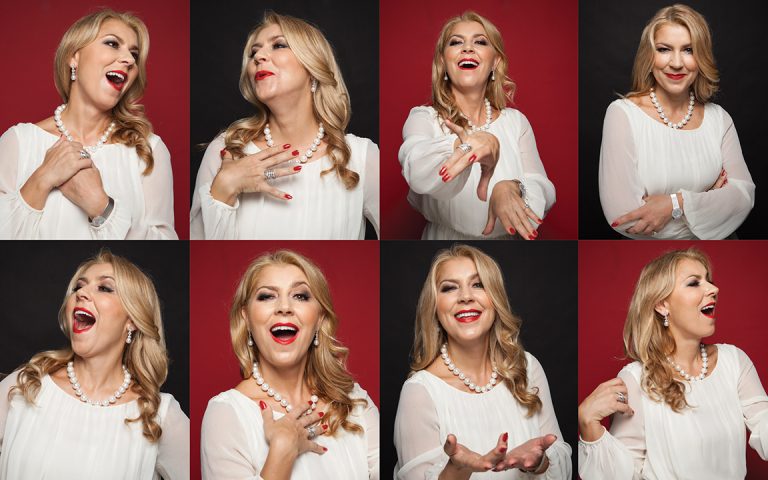 Mezzo-soprano Milena Kitic was in her 20s, a budding star at the Belgrade Opera, when she first sang the title role in Georges Bizet’s “Carmen.” It was perhaps the optimal age to portray the sultry seductress.

On the other hand, Kitic, now 48, has had no trouble keeping her Carmen ageless, and the beguiling gypsy has become a signature role for her. This Serbian native has sung the part of the voluptuous, headstrong cigarette roller more than 150 times in nearly a dozen productions around the world, from strictly traditional stagings to others she labels “stylistically Euro-trash.” She made her 2005 New York Metropolitan Opera debut as Carmen. Though repertory is diverse, she became a favorite in the part at Orange County’s late, lamented Opera Pacific.

“Kitic’s Carmen is a woman full of herself. Her self-regard is expressed by that satisfied smirk on her face and the easy swivel of her hips,” wrote Register classical music critic Timothy Mangan in describing Kitic’s operatic charms. “She’s got kind of a bullying swagger—men don’t stand a chance.”

Still in perfect voice more than two decades after becoming a professional, she reprises the role in semistaged performances with the Pacific Symphony and Pacific Chorale from Feb. 19 through 24.
What makes her so ideally suited to the role?

“The voice, No. 1,” she says. “It fits my vocal range. But also the acting and the flamenco. … The Los Angeles Times reviewer talked not only about my singing, but also my dancing—he compared me to a ‘refined Charo.’ That was cute!
“Whatever my own true nature is, I try to understand the character,” she says. “As I mature, I’m able to do that more and more. I grew with the role. I might have looked better when I was younger, but it’s more important how I express her in the words.”

In 2007, Kitic shocked her fans—and her manager—when she took a hiatus from the stage for the role of full-time mom. At the time, she was married to Newport Beach businessman and former Yugoslav Prime Minister Milan Panic (they now are divorced), and their son Spencer was 5 years old.

He’s now 13, and Kitic is very much back on stage. She re-entered the spotlight in 2012 as Suzuki in Giacomo Puccini’s “Madame Butterfly,” starred in a fully staged version of “Carmen” at LA Opera the following year, and played a nun—about as different a character as can be imagined—in Jules Massenet’s “Thaïs” last year.

This month, she also presents a recital in Houston and, in March, plays Mrs. Noah—here a garrulous gossip—in Benjamin Britten’s “Noah’s Flood” at LA Opera. She has just turned down an offer to do “Carmen” in Malaysia. During the school year, she’s still a stay-near-home mom.

“There are always offers,” Kitic says. “I simply can’t leave for a month—I can’t take my son. If it’s summer, then I would take him with me.”

From the time Spencer was born until Kitic made her decision to stay home in the prime of her career, the boy had gone wherever his mother’s global engagements demanded. “I didn’t leave him behind, ever. I would stay in hotels, two months here, one month there, three weeks there. … When my son had to start going to school, I realized it is either this or that. If I keep singing and performing at this level, I will never be at home.”

Mother, son, and a pair of Yorkie terriers live in one of Newport Beach’s high-end gated communities filled with young families, and where kids play in the street. What makes Kitic’s home unusual is that right off the entry hall is a music studio where she teaches, prepares for operatic roles, and warms up before performances.

On the day a reporter arrives, Kitic has taken Spencer to school, done warm-ups with a student who flew in from Texas for lessons, and is preparing for a concert at Christ Cathedral in Garden Grove that night.
Still, she is gracious and relaxed. Though there was no prior mention of lunch, she offers a or a sandwich of tuna, bacon, and corn on garlic bread. “The name of it is ‘good stuff!’ ” she says with an infectious, almost melodious laugh.
It’s a gorgeous day, and we move out onto the patio.

Leaving the stage proved difficult for Kitic in more ways than one.

For starters, she recalls, “it was hard to cancel signed contracts”—contracts in which she’d agreed to appear in Sergei Prokofiev’s “War & Peace” and Amilcare Ponchielli’s “La Gioconda” at the Metropolitan Opera. “These were not in negotiations; I had signed them. And not only the Metropolitan.”

Many people, including her manager, tried to dissuade her. But those closest to her understood her decision.

Did she miss being onstage?

Teaching helped answer those questions. Kitic served as the inaugural artist-in-residence at Chapman University in Orange, and remains an adjunct professor. She teaches privately; weekends often are reserved for students. She has taught master classes at Chapman and the Orange County School of the Arts in Santa Ana.

Maria Lazarova, director of OCSA’s classical voice conservatory, says Kitic brings “gravitas,” a certain dignity, to the stage: “She is a lovely lady, very warm—a friendly diva! She’s one of the most technically pristine singers—impeccable technique, an impressive instrument and very polished. It’s perfect singing; I don’t know how else to say it.”

Kitic doesn’t seem to mind the “diva” label. Before its demise after 22 seasons, Opera Pacific dubbed her its Diva of the Year. And Carmen has been called the ultimate diva role.

“‘Diva’ is a term that got a little bit twisted with time,” Kitic says. “Somebody who is capricious, hard to please, demanding, and so on. But it’s actually a [legitimate] term for an opera singer, mostly sopranos—they have to sing the leading roles. A diva is somebody who has been performing throughout the whole world, speaks several languages, works very hard, and actually deserves the term. If somebody would call me a friendly diva, I would say, ‘Thank you very much, I do appreciate it!’ ”

Kitic also serves as LA Opera’s chair for artistic excellence, and you might say “friendly” is part of her job description. “She’s an ambassador in the community,” says Christopher Koelsch, president and CEO of LA Opera. “It is an enormous burden for the company to raise money. Frankly, her glamour makes her an incredible asset for proselytizing for us, particularly in Orange County.

“She’s a remarkably elegant singer, and an incredibly versatile one. We were bereft when she put her career on hold to raise her son. And we were so thrilled when she came back. … She is among that rarefied group of people in whom we have a long-term interest.”

As Koelsch’s comments suggest, Kitic didn’t have much difficulty re-entering the workforce. “I never stopped singing completely,” Kitic recalls. “I was teaching … so I kept my voice in great shape. When my manager and others heard me, they were pleasantly surprised.”

She also kept her body in shape, which matters in today’s operatic world. Kitic’s career, which on her path from Belgrade to Newport Beach has included many of the world’s great stages, was built on beautiful looks and beautiful singing. She believes her fitness regime benefits her stage presence and vocal production.

“When I was younger, I was a gymnast,” Kitic says. “I won prizes at the republic level. Today, I run the treadmill. Do weights. Work out.”

Still, she can’t be Carmen forever. “Verdi is really right for me,” Kitic says. “I sang Amneris in ‘Aïda’ with Opera Pacific—I would love to sing Amneris again. The role that I haven’t sung is Azucena in ‘Il Trovatore.’ I think I’m the right age now to do that.”

The “good stuff” sandwich gone, we return to her studio, where the centerpiece is an elaborately carved Everett grand piano, a prop from the 1947 version of “The Secret Life of Walter Mitty,” starring Danny Kaye. On the walls of the studio are mementos and magazine covers that feature her.

Photos include a rare one with North Korea’s late President Kim Il-sung, for whom, decades ago, she and others [from Communist countries] performed annually on his birthday. “I asked my son, ‘Do you think I should put this one up on Facebook?’ ” she says. “He said, ‘Are you crazy?’ ” Another was taken at her voice teacher’s 90th birthday celebration in Belgrade with 90 students and 90 flowers. In a 2004 image from LA Opera’s “Carmen,” she’s seen with model-flamenco dancer Timo Nunez, recently featured in a Vogue Italia cover story. “I often use this photo [for publicity purposes], because I like him, too!” she says, laughing.

Among her mementos is the winner’s plaque from the 1998 La Pala Fenice charity gala competition in Venice, Italy. Proceeds—including her award of 5 billion liras, which she believes would have been about $1 million at the time—went toward rebuilding the city’s celebrated La Fenice opera house, which had been destroyed by fire.

Kitic has a busy afternoon ahead and she accompanies me to the door. I have one last burning question, a tricky one among opera-loving parents: How on earth do you get a child to sit through an opera?
When Spencer was younger, Kitic says, she would read him the libretto ahead of time, and between acts remind him of the narrative. “It is crucial to understand the story. In the middle, he would fall asleep, but that was perfectly fine with me.”

When Spencer first came to see his mother in “Carmen,” she wouldn’t allow him to stay for the third and fourth acts. “I would get killed!” she says. “It’s very dark.”

But when Spencer got a little older, she recalls, “I explained it was not killing for real. The knife doesn’t go in.”