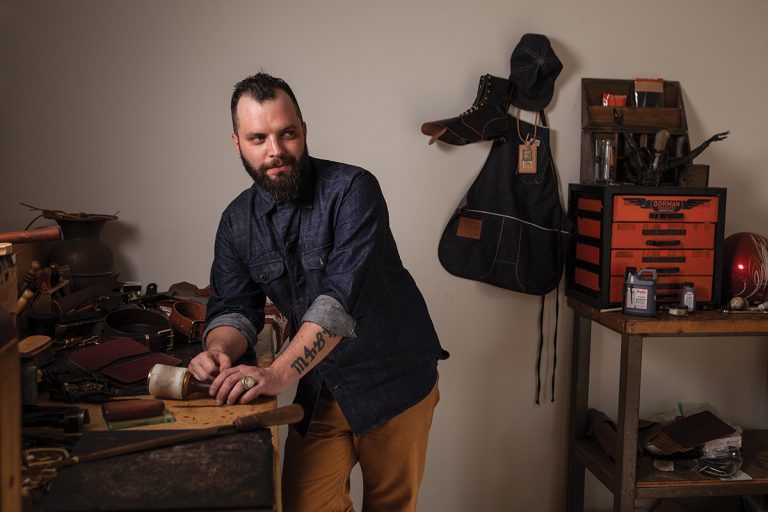 You might not have heard of Ray Lansburg, but fans of Japanese denim and motorcycle culture sure have, in places such as Germany, Southeast Asia, Switzerland, Australia, and Russia. That’s because the Fullerton resident’s hand-stitched leather wallets and belts have a cult following overseas.

Lansburg runs a one-man operation in his backyard shed, producing between seven and 25 handcrafted items a month, most of which sell overnight. The 32-year-old imports the best leather he can find from England and Japan, creates simple yet distinctive designs, and painstakingly cuts, finishes, and hand-sews each piece. The process can take 15 hours for a multi-pocketed wallet, so when Lansburg gets bored with a design, he stops making it.

“Sometimes customers complain about that,” he says. “They want something I stopped making months ago. But the process takes so long—I have to punch hundreds of holes by hand and stitch for hours—that if I’m not enjoying it, what’s the point?”

It all started in 2007 as a hobby. Lansburg wanted a wallet he saw in a motorcycle magazine, but it was too expensive. So he decided to make one himself. Soon he was hooked on the idea of “making a mundane object fun and personal.” He even got fired from his full-time graphic design job for sketching wallets on company time. He interned for a year at Little Handmade, an Italian handbag-maker in Fullerton, then launched Blackacre.

Today his wallets sell for $150 to $800, depending on the type of leather. He says he draws inspiration from films, asking himself “What kind of wallet would Clint Eastwood’s character in ‘Fistful of Dollars’ carry?”