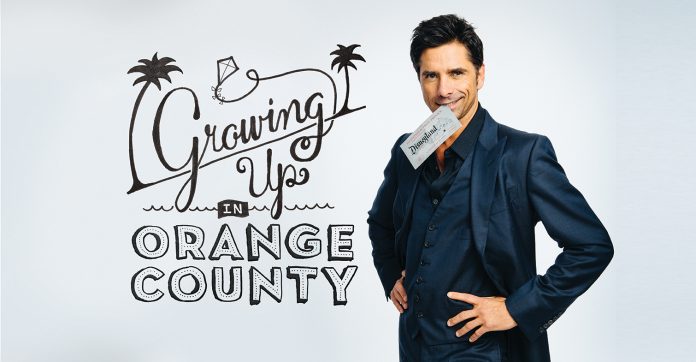 When he was growing up, young John Stamos put together a to-do list. He aspired to be in a sitcom. He checked that off with “Full House.” He wanted to perform with the Beach Boys—check!—and get VIP treatment at Disneyland so he could skip those long ride lines. Check! Now 51, he’s co-starring in a new prime-time soap and producing a slate of projects, including a hoped-for “Full House” revival.

Orange County helped me to become who I am. I wouldn’t be a dreamer if it weren’t for where I grew up. I wouldn’t have moved forward with an anything-is-possible feeling.
I lived just eight minutes from Knott’s Berry Farm and 20 minutes from Disneyland. I spent my childhood going to those parks, especially Disneyland.
I know everybody says this, but in high school [John F. Kennedy High in La Palma] I really was the dorky kid. I was into magic and theme parks. I was very innocent. When a lot of kids my age were going out drinking on Friday and Saturday nights, I was at Disneyland, going on the rides and listening to the bands.

Top photograph: “I’m a big Disneyland collector. This is an original silver ticket from 1955, when the park opened. It’s like having one of the Willy Wonka tickets.”

I’m a Disney collector. I have a Dumbo [vehicle from the ride] and, you remember Mr. Toad? It’s a weird, dark ride. He gets hit by a train and goes to hell. And these devils are laughing. And I have one of the devils.
And, I have the sign—the big sign that was [at the entrance] on Harbor Boulevard [from 1989 to ’99]. It was on eBay and I put in a bid [$30,700]. Michael Jackson wanted it, too. But he got distracted and missed bidding on it.
I was looking for a place to put it—the letters are 14-by-8-feet—so we put the “D” up behind the guesthouse. And I didn’t think about how, from Laurel Canyon at Mulholland, you could see this gigantic letter. Gwen Stefani is across the hill and I ran into her somewhere, and she said, “My kids think your house is Disneyland. They want to come visit.”
I still love going to Disneyland. I don’t have a lifetime pass. That’s a rumor. But, they’re always happy to accommodate me. I don’t have to stand in the lines. Which is kind of … well … I wear a hat.

My dad owned fast-food restaurants. He had a place in Gardena called Yellow Basket. He later bought three or four other restaurants. One of them was about five blocks from our house on Del Amo Boulevard near the 605 Freeway. That was part of my childhood. I worked there from the time I was 13.
And then in 1982, I got on “General Hospital.” And the story there is, I was working [in Hollywood] during the week, but my dad wouldn’t let me quit the restaurant. To my dad, it was about discipline and not knowing how long the acting would last. We didn’t realize how big “General Hospital” was. So I would still go to work on Sundays and kids were coming to the restaurant for autographs and pictures.

And I’m flipping burgers, working the counter, wearing an apron. And I eventually said, “Dad, I gotta quit. I’m a teen idol.”

Because of my dad and the discipline he had toward his work, I learned to be a pro and arrive early and know my lines and hit my marks. I’ll never forget my dad saying, “When you go to work, don’t forget to treat the janitor the same way you treat the producer.”

I had an eight-track of “Endless Summer,” a greatest-hits Beach Boys’ album, which I played over and over. When I saw them in concert—I was about 14—I was totally blown away. I later got to know them.
In 1985 they asked me to play with them. I’ve been doing it off and on [as a drummer, guitarist, and singer] ever since. Their music is timeless. I call it heart music, because it goes straight to the heart.
I’m always trying to get a younger generation to learn about the Beach Boys. I have the music rights and am working on a nonbiographical film that’s a romance that weaves in the music. Like “Mamma Mia!” did with ABBA and “Across the Universe” [did with the Beatles]. It’s in development at Fox.

I’m always asked about it. It seems to always be running. [The original 1987-95 series currently is on Nickelodeon]. The resurgence is insane.
What’s interesting about “Full House” is that it was about three guys—not a mother and a father—who are raising kids. That was unheard of back then, but now it’s the new normal.
I’m very proud of that show—though I haven’t watched it in years. It’s kind of hard to look at myself in those clothes and with that hair. It looks like I’m wearing a dead crow on my head.
Recently, I’ve been pitching a sequel to “Full House.” The idea is to have it take place in the same house as the original—because I’ve always thought of the house as a character.

I work all the time. Sometimes it’s a super-high-profile show like “ER,” or  “Glee,” or a Super Bowl commercial. And then I’ll kind of go quiet, which means I’m working in theater—I’ve done four or five Broadway shows—or I’m producing. A year and a half ago, I was with James Earl Jones and Angela Lansbury in “The Best Man,” and nobody talked about it. All people want to talk about is “Full House.”
I’m also in a new show called “Members Only,” which is set at a country club and is a kind of “Upstairs, Downstairs,” because it’s about the members and the people who work there. I play a charming bad guy. I wanted to play against type.