Home 2014 French Tryst: An Ideal Home for the Romantic Shopaholic 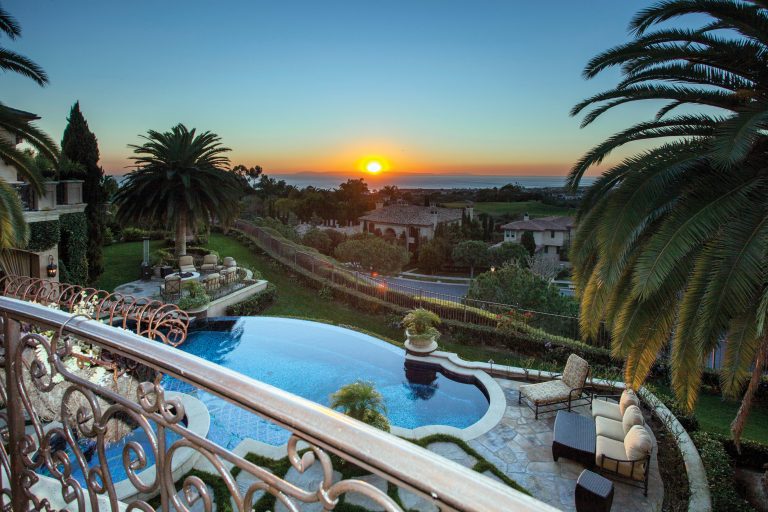 Bedrooms 7 Baths 9
Amenities Movie theater with surround sound and 10 fully reclining leather seats; a subterranean garage for eight cars; and an elevator.
Postscript This is the home of Glenn and Mindy Stearns. He is CEO and founder of Stearns Lending; she is a TV entertainment reporter. She was known as Mindy Burbano when he proposed to her, here, on camera, while she was doing a report on palatial homes of Southern California. Their wedding at the home was a Tuscan-style gala. Perched in the Newport Coast hills, this contemporized country French home encompasses more than 13,000 square feet and offers stunning details, such as Venetian plastered walls and a limestone-encased master-bedroom fireplace. Still, it never feels ostentatious. Designed by architect John McInnes and built by Aleck Dugally, the wow factor begins at the entry, with walnut flooring and white oak inlay. The great room, with a custom fireplace of hand-carved wood and marble, is beyond; to one side, a lushly carpeted sweeping staircase. Each room boasts beautiful ceiling design treatments: copper-leafed in the bar/game room, and wood-coffered in the master bedroom suite. The latter has three walk-in closets that accommodate more than 100 linear feet of hanging space and 500 pairs of shoes. Situated on a double lot, the home has sliding glass pocket doors that allow the indoors and outdoors to merge; covered loggias rim formal landscaping, fountains, and an infinity pool. From the upstairs balconies, one can see the ocean, Newport Harbor, and Fashion Island. Oui! Oui!

The media-centric Stearns did a stint on the TBS reality series “The Real Gilligan’s Island” in 2004, appearing as the Millionaire and the Millionaire’s Wife. Glenn Stearns won the competition’s $250,000 prize, which he donated to charity.