“The Knockout Queen” describes the unlikely friendship of Michael, a whip-smart gay renegade, and his neighbor Bunny, a beautiful star athlete. They navigate high school together until an explosive act of violence sets them on divergent paths. Thorpe, who grew up in Corona del Mar, wrote her first novel while working as a waitress at Ruby’s Diner on the Balboa Pier. She now lives in El Segundo with her husband and two sons.

What draws you to write about teenagers and young adults?
When I first started writing, I couldn’t have written convincingly about parenting a teenager or what it’s like to be in a marriage after 20 years, so it was natural to start with a period that I felt I understood better. I think the teenage years are really formative, and what we end up doing in our 20s and 30s is processing the things we did when we were 18.

Bunny is 6-foot-3 and weighs 200 pounds. What was it about a big, powerful young woman that interested you?
I was really tall as a kid. I have not grown since I was 10 years old. I was adult size in fourth or fifth grade. I thought that I was going to keep growing and be really big. I think also that I tend to carry a lot of muscle and I’m strong. I have sort of maintained the illusion of physical power. I had a pretty abusive relationship at one point where I had to figure out that I was physically a lot more powerless than I was comfortable with. I had not really understood the extent to which women were at men’s mercy.

Bullying plays a role in the book. Did you experience bullying as a kid?
I think the main time I experienced bullying, and not just kids being mean, was when I skipped sixth grade and enrolled in seventh grade. I wound up (changing schools) after just a few months because the bullying was pretty targeted and intense. It was really a couple of girls who were being super mean. They were identical twins, and that added a creepy factor. Identical twins bullying you does leave a mark. 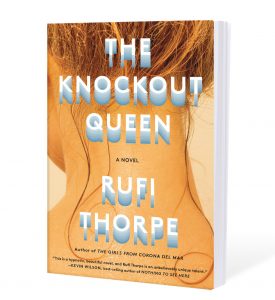 Did it give you pause to write in the voice of a young gay male?
I had written a whole draft from Bunny’s point of view, and it wasn’t working. When I thought of this neighbor, who had so many things in common but was quicker to understand people and their motives, it started to write itself. I am not one of those who believe that fiction writers are channeling from an imaginary realm, so I think that Michael is just a deeply repressed aspect of self. So sure enough, he started wanting to claim parts of my biographical past. Through my 20s … I was in denial about my own bisexuality. I think Michael rings true because a lot of it is authentic biographical material. I think what really matters is if people are hurt by it. Obviously, I really hope that nobody is, and that people can tell that I’m in good faith.