Home 2015 A Conversation With Johnny Johur of Artifex Brewing Co. 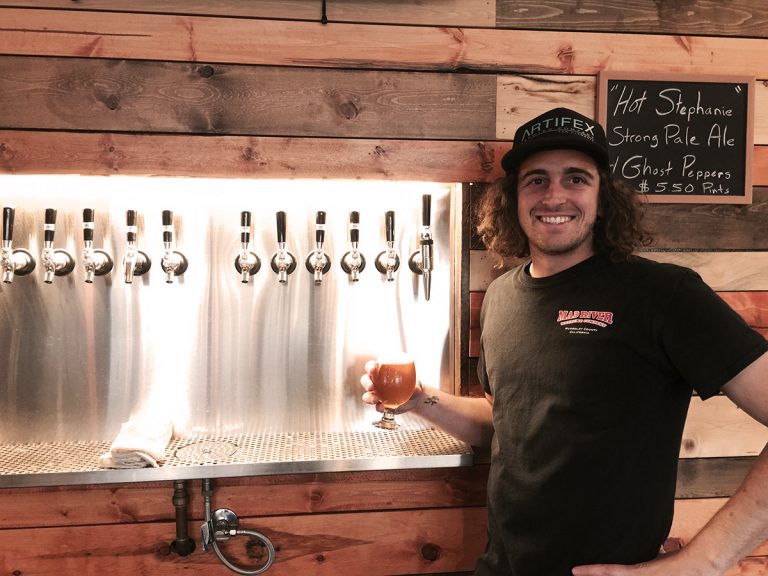 When the Artifex crew—most of them surfers—chose a location for the brewery, they settled for two miles from the ocean in San Clemente. The inspiration paid off. News of these IPA-heavy producers has traveled fast. Their beers are hoppy, and the tasting room is the size of a Twister mat, with just enough room to order a beer, spin the dial, put your left foot on red and your right hand on a Rye-Diculous IPA. I asked brewer Johur over a game of Jenga …

How did you get your start?
As bar manager for Pizza Port in Solana Beach in 2009. I was fortunate enough to also become the assistant brewer and learn on such a historic and award-winning system. The Pizza Port breweries have produced award-winning beers created by award-winning brewers for years, so I feel like I got my start at the right spot.

How did you land on the name Artifex?
This was one of the hardest parts of starting a company. Ultimately we chose it for its meaning. It’s a Latin word for an artisan or craftsman; someone who carries out work that requires a certain specialty or skill. We felt that this described us as a company and as brewers.

Do any San Diego beer travelers come up this way?
We definitely see them in our tasting room. A lot of them visit because they’ve had our beer at different bars and restaurants down south. Some come up because of recommendations from other breweries.

Describe the San Clemente food and beer scene.
Left Coast Brewing and Pizza Port put it on the map early. The food scene is great, too, with MRK Public (look for new table seating) and Barnoa serving killer food.