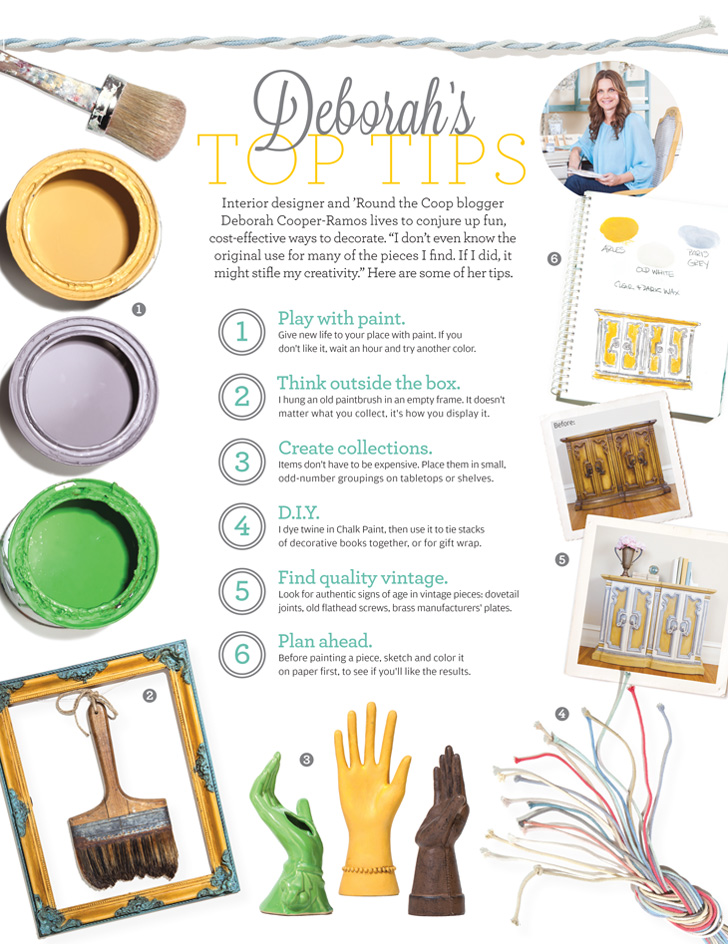 When Deborah Cooper-Ramos was barely 8, she asked for a bedroom with baby-pink walls. She slept in a pink canopy bed, and drew on her cardboard playhouse with pink crayons. More than three decades later, the interior designer is still in love with color and paint, and nowhere is this more obvious than in her charming 1904 rental cottage in Orange, and on her blog ’Round the Coop.

She began blogging four years ago after a stint at Newport Beach Interior Designers Institute. She assisted on model home installations and did residential design,  but when the housing market fell apart, writing became the way to feed her creativity while waiting for better times. Postings focused on her vintage and flea market finds, complete with inventive ways to repurpose them: old doorknobs became clever paperweights, a floral frog was made to hold pencils, a vintage suitcase became a night table.

She also began painting objects, but was discouraged by the time-consuming process of stripping and sanding. She learned of a new paint from England that circumvented the prep and could be used on any surface. “After that, I couldn’t stop painting,” says Cooper-Ramos, who redid her former condo in two days. “I painted my kitchen cabinets, my night tables, my metal wall sconces, the back of my wood sofa. I even stenciled some family room pillows.” Enthralled by the discovery, she opened a tiny booth at her favorite vintage shop, Country Roads Antiques & Gardens in Old Towne Orange, and became the first O.C. retailer to carry Annie Sloan Chalk Paint.

To see the full feature, including the extraordinary photos of her cottage, subscribe or order a digital copy of our June 2013 issue here.