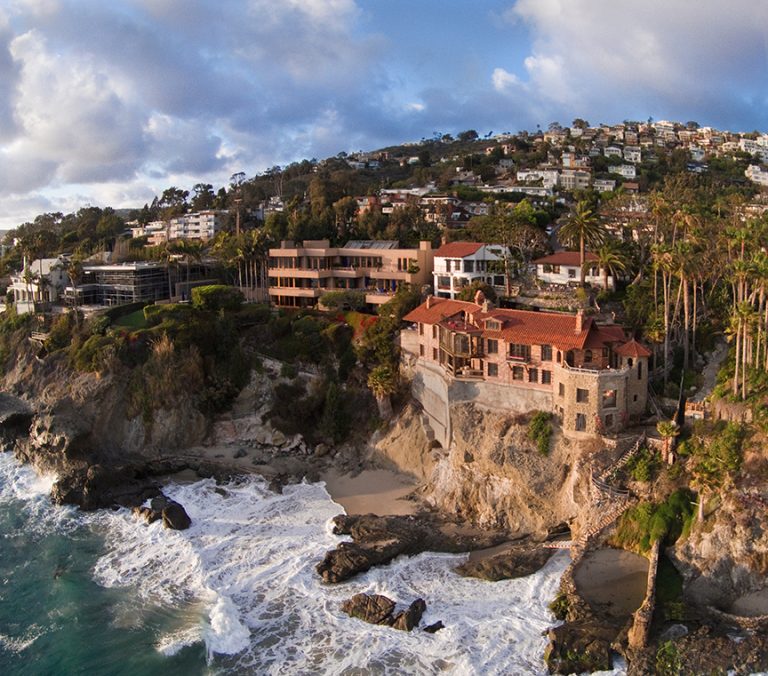 Postscript In 1984, Mariona became the first Laguna Beach property to be placed on the National Register of Historic Places. It’s approved for the Mills Act tax advantage.

Called Mariona, this estate is a unique melding of Mission-Mediterranean-Craftsman styles. The historic main house conforms to the craggy cliff, some 50 feet above the surf. Built between 1918 and ’21 for $100,000, its five irregularly shaped bedrooms and 4½ baths meander up and around various staircases and passageways. There are arched windows and doorways, and heavy wooden doors with brass treatment. The great room has massive ceiling beams (early era telephone poles!), leaded windows, and Honduran mahogany floors. The view from the dining room is worthy of Alfred Hitchcock’s “Vertigo.” Anyone familiar with Riverside’s Mission Inn will have a sense of déjà vu, because Mariona was a collaboration of the inn’s developer, Frank Miller, and its architect, Arthur Benton. A gift and namesake for Miller’s second wife, Marion, it includes a 1920s-era second building with four guest apartments (all told, the property has more than 8,000 square feet of living space); paths and decks; and lush landscaping highlighted by vertical walls of succulents. Thirty-eight stone steps lead from the garage down to the main house. Ah, but getting there is its own reward.

CELEBRITY VISITORS
Hollywood stars, including Mary Pickford and Douglas Fairbanks, basked in the sun at the estate also once known as Villa Rockledge. Bette Davis snagged a husband there: While living in Laguna, she attended a party at one of the Mariona apartments and met William “Bill” Grant Sherry, a painter and artist. They married in 1945 at Riverside’s Mission Inn—and divorced five years later.