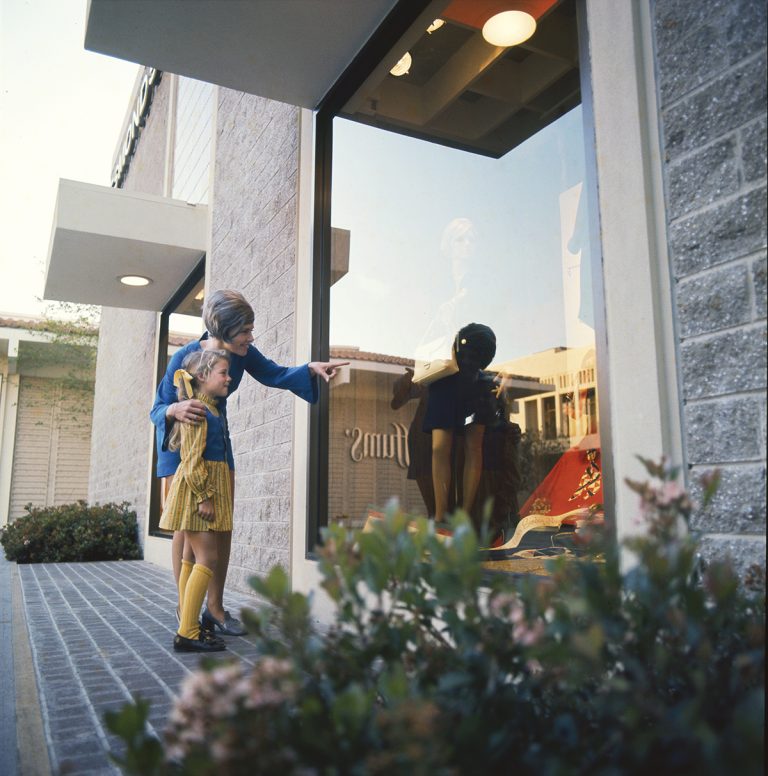 Fashion Island and South Coast Plaza are celebrating their golden anniversaries this year. Since their openings, they’ve become integral to Orange County culture. We recount some of that history.

Did You know …
→ South Coast Plaza’s retail sales are reportedly close to $2 billion per year.
→ A year after it opened, South Coast Plaza got a boost from the completion of the 405 Freeway.
→ This Tiffany & Co. location was once touted as the best-performing store outside of the New York City flagship on Fifth Avenue.
→ Seeking to tap into the culture of gift-giving, South Coast Plaza started its global outreach in Japan.

Timeline…
1967 In the middle of a former lima bean field, the air-conditioned center opens with 70 shops and a carousel, anchored by Sears and May Company stores.
1975 “Paris Comes to Orange County,” coos the Los Angeles Times, citing the opening of the second Courrèges boutique in SoCal. The other was on Rodeo Drive.
1978 Nordstrom chooses South Coast Plaza for its first store outside the Pacific Northwest.
1982 Yves Saint Laurent’s Rive Gauche boutique opens. Despite a recession, customers snapped up $2,000 evening dresses, $800 suits, and $450 silk blouses.
1986 Crystal Court opens across Bear Street with a Robinson’s, Broadway, and 60 other stores. On
the far side of Bristol Street, culture beckons at the new Orange County Performing Arts Center (later renamed Segerstrom Center for the Arts).
2007 A third-floor corridor known as the Penthouse opens adjacent to Nordstrom, with French bistro Marché Moderne, recipient of numerous “best restaurant” honors (including from Orange Coast). The following year, Oscar de la Renta, Christian Louboutin, and other luxury brands open.
2017 South Coast Plaza  buys the Sears store and land from Sears Holdings Corp., owner of Sears and Kmart stores. Sears has been struggling financially. But it’s staying put—for now.

It All Translates into $$$ Will that be Visa, MasterCard, American Express, or China UnionPay? In 2012, South Coast Plaza became the first U.S. shopping center to accept the last option, also known as UnionPay or CUP. Shortly after,  a six-figure purchase at an unnamed jewelry store at SCP became the largest single transaction for the card, reported U.S.-based tourism company Attract China in 2014. Retail has vied for Chinese money since a 2007 U.S.-China agreement to promote travel between the two countries. South Coast Plaza’s multilingual concierge staff includes Mandarin speakers.

The Carousel
An original feature, this popular attraction has become a symbol for South Coast Plaza.

Built by: California-based Arrow Development, responsible for many Disneyland rides

The animals: 20 horses, along with two chariots pulled by winged dragons

Holiday time: Horses are exchanged for bunnies at Easter and reindeer at Christmas.

Good Deeds: The carousel has been used for fundraising, including bringing in $55,000 in 2011 for two nonprofits providing equine therapy to children.

Sweetheart’s Day: Tickets ordinarily are $1, but rides were free on this South Coast Plaza-designated day in 1976.

Did You know …
→ The Venetian-themed carousel formerly outside Macy’s is now
at the Great Park in Irvine.
→ Wind chimes— the world’s largest at the time—were installed two days after the center opened.
→ The trolley transporting visitors around Fashion Island travels an average of 15 miles a day.
→ Some 51,000 scouts attended the 1953 National Boy Scout Jamboree, on land that is now part of the mall.

Timeline…
1967 Although it was named Newport Town Center at the previous year’s groundbreaking, the new center is renamed Fashion Island. It opens with a charity event that attracts 18,000 people.
1982 Deck the mall! The Fashion Island Christmas tree, at 115 feet, is declared the nation’s tallest.
1985 Atrium Court replaces JC Penney. The three-story space has shops and a food court, and is credited
with increasing sales by 33 percent.
1989 It’s a renaissance—thanks to three paseos, a new food court, a seven-screen movie theater, and a four-level
parking structure, all in Italianate design.
1996 The signature “brown bag” arrives—O.C.’s first Bloomingdale’s.
1997 Grey Poupon, anyone? A record 300 Rolls-Royce and Bentley owners circle Fashion Island to raise money for charity and roll into “Guinness World Records.”
2012  Whole Foods opens a 33,800-square-foot store, upping the ante in the high-end grocery wars with its 150-seat bar-restaurant, chilled walk-in cheese room, and other amenities.

Building cultural bridges In partnership with Irvine Spectrum and Macy’s, Fashion Island officials work with the Orange County Visitors Association and the Sheikh Mohammed bin Rashid Centre for Cultural Understanding so their employees can better assist visitors from the Middle East. A 30-minute online training video—detailing Arabic customs, business etiquette, and cultural do’s and don’ts—includes helpful phrases such as as-salāmu ‘alaykum, a greeting that means “peace be upon you.”

Q & A Designer
Al Treviño Jr., 85, was with the Irvine Company in the early 1960s, designing University Park, Turtle Rock, and more, when he was given the opportunity to put his spin on Fashion Island.

Tell us about the center’s early design concepts.
They (the Irvine Company) hired the firm of Welton Becket, and an architect was assigned. But they were dilly-dallying and talking about an enclosed mall. I told Charlie Thomas, president of the Irvine Company, that anybody who knew the coast wouldn’t want to go to a covered mall. … When the sales staff went to Chicago, I suggested they look at a project called Old Orchard, an outdoor mall. They took the trip and when they came back they said, “Treviño’s right …”

What happened next?
I put together a layout, with a ring road—and high-rises around it. People would look at it and say, “What are you smoking? There aren’t going to be high-rises there.”

But you didn’t see the project to completion. Why not?
I got really upset when I was told that Thomas—who was a big Republican—didn’t want someone with a Hispanic name representing the company. When I heard that, I immediately dialed General Electric, which had tried to hire me a month earlier. Within five minutes, I had a new job for twice my pay.