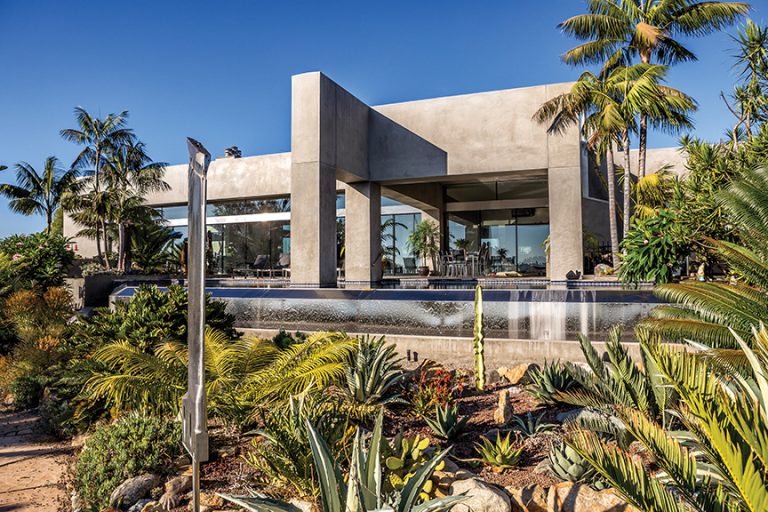 NOT FOR SALE value estimated at $20 million | Moriarty House

Amenities Two guest suites—The Bay Room and The Koi Room, named for their respective views; a quarter-mile driveway; and the Newport Beach Vineyards & Winery. The latter has an 85-foot-long, 1,000-square-foot wine cave that’s locked with a key to an old Soviet secret police prison.

Postscript Moriarty founded the winery  in 1998 and adheres to the philosophy “World domination through vinefication.” It produces as many as 350 bottles of red wine a year. It’s not open to walk-in visitors, but welcomes reservations for special events.

What would you do with a ’74 lamborghini after the engine dies?

The first thing that catches your eye in this concrete, steel, and glass contemporary retreat is the Lamborghini bolted to the wall. A jet-black 1974 Countach, to be precise. It’s mounted above the spectacular glass staircase and below the skylight that accommodated its installation. But the Upper Newport Bay home of Segerstrom heir and vintner Richard Moriarty is more than testosterone-fueled eye candy. Designed by Fleetwood B. Joiner & Associates, and built in 2006 at a cost of $2 million, it opens at the back, where an infinity pool disappears into the estuaries and equestrian trails of the scenic bay. The master bedroom and its adjoining bath and his-and-her closets are at one side of the great room; the open kitchen is at the other, a butler’s pantry just behind it. The media room has a pool table and the owner’s collection of tribal masks from around the world. The eclectic vibe continues down the structural glass stairs—or, you can take the elevator—where you’ll find a glass-encased wine cellar and a garage/workroom/playroom that houses eight cars and three motorcycles. The house (5,000 square feet) and garage (3,000 square feet) are situated on 3.8 acres of vineyard with 1,500 vines. We’ll drink to that.