Deeply ingrained in the psyche of many longtime Laguna Beach residents is the conviction that their town is unique and that any development threatens its innate charm.

They want to keep homes motley, not glitzy; the hotels boutiquey, not opulent; the vibe casual, not corporate.

In the minds of these folks, if there’s one place Laguna Beach doesn’t want to grow up to be, it’s Newport Beach.

Yet a number of Lagunans fear that fate is inevitable now that the recently named Laguna Beach Co., a family business headed by local Mo Honarkar, has acquired a significant number of properties. These include the iconic Hotel Laguna, as well as three large blocks on Coast Highway and an expansive stretch of land along Laguna Canyon Road. The company also owns the historic Royal Hawaiian restaurant and Terra Laguna Beach, the remodeled restaurant on the Festival of Arts grounds, as well as residential properties in the canyon.

“Unfortunately, ‘developer’ has become a negative term,” says Hasty Honarkar, one of Mo’s two daughters and a vice president of the company, who objects to the characterization of their projects as destructive to the town’s appeal. “That saddens me. Our goal is to increase inclusivity and diversity in all the properties we own. We are locals. We cherish this town. We want to beautify distressed properties, and there are so many that need refurbishing.”

Pushback against the company’s projects arises primarily because of the sheer number of historic properties it owns, exacerbated by the fact that the Honarkars contributed thousands to a PAC whose goal is to rid the town of certain building restrictions. Indeed, the company is upfront about its desire to change the criteria of the Design Review Board and Planning Commission.

That prospect doesn’t sit well with Village Laguna, which was formed in 1971 to oppose high-rise buildings along the coastline. The group helped keep the canyon free of development in the 1970s, and its stated mission is to preserve, enhance, and celebrate the unique village character and cultural heritage of Laguna Beach.

“It is much too early to tell if the impact of Mr. Honarkar’s investments will be positive or negative on our town,” says Johanna Felder, president of Village Laguna. “However, it is alarming that whole blocks have been acquired. There is the potential for a master-planned look, which is contrary to the charming, small scale, individual character that people love about Laguna Beach.”

Hasty counters that the Honarkars didn’t seek out all the properties they now own.

“We weren’t even looking in many cases. People came to us with properties that were available and tangible,” she says. “We love our town, and we want to see it thrive. We wish more local developers would invest in Laguna, but they stay away because of overregulation.”

Paula Hornbuckle-Arnold, executive director of the Laguna Beach Chamber of Commerce, agrees there is a serious need to revitalize the town, which has seen a number of prominent retailers and restaurants close in recent years.

“It’s a tough business market right now. There are not a lot of people clamoring to purchase multimillion-dollar dilapidated buildings and take on the task of a major remodel. We welcome the Honarkars and any other investors who have the means and vision to revitalize Laguna’s business community while maintaining our special character,” she says. 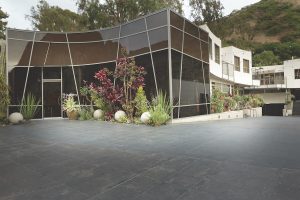 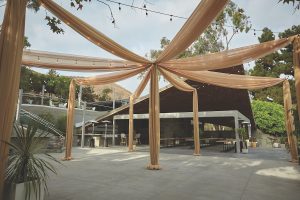 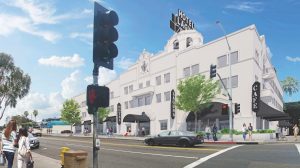 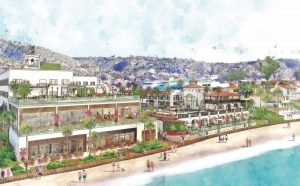 Peter Blake, outspoken Laguna Beach councilman and gallery owner, poses this question: “Would people rather have out-of-town developers descend on the town? From London or Shanghai or wherever? Who don’t know our history? Or Mo Honarkar, a local who made his fortune in telecommunications and could have retired, no worries, but instead decided to invest in this town because it’s his home and he was concerned about all the distressed buildings?”

Blake adds: “I’m fearful that Village Laguna will use its usual delay-and- obstruct tactics on the Honarkars’ projects, and that would be a disaster for the city. Imagine if Mo hadn’t bought these buildings, how dilapidated they would become.”

Hornbuckle-Arnold understands why locals fear the power of a single developer to change the look of the town.

“I get it. But the reality is that the Honarkars will have to go through the same process as every other landowner/developer. We are confident that as long as the projects are judged on their merit, not their ownership, and as long as projects are done with community involvement, no favoritism, and thoughtful review, then all fears will have been addressed,” she says.

There might be room for compromise between the two factions.

“We have yet to see any (significant) revisions of (the proposed hotel on) Cleo Street or plans for the other projects,” Felder says. “So it is difficult to know if Mr. Honarkar is sincere about his willingness to listen to the community and follow our general plan. But projects that are sensitively designed and don’t overreach can become a good fit for Laguna.”

The opposition to the Honarkars’ plans surprised Hasty at first, especially the vitriol expressed toward her family on social media. An American who has lived in Laguna Beach for nearly 20 years, she says she has been subjected to racist remarks targeting her Iranian roots, as well as sexist comments.

“It’s not only offensive, in many cases outright lies are being circulated,” she says. “We are not planning to build high-rises. We want to respect the past but build for the future, too. Laguna’s known for its eclectic architecture, and that’s the character we want to keep.”

“It is alarming that whole blocks have been acquired. There is the potential for a master-planned look, which is contrary to the … individual character that people love about Laguna Beach.”
—Johanna Felder,
president of Village Laguna

“We are locals. We cherish this town. We want to beautify distressed properties, and there are so many that need refurbishing.”
—Hasty Honarkar

She points to the Royal Hawaiian as an example of this approach. “We debated changing the name because we didn’t want to be seen as appropriating history. But then we decided that we could celebrate its past while improving the place.”

Blake shares that he has seen residents harassing Royal Hawaiian staff about the Honarkars’ plans. “That’s what this has come to,” he says. “It’s disgusting.”

Hasty says she can handle the challenges, no matter how personal they get, because she’s living her childhood dream. As a young girl, she played with Legos and Lincoln Logs, not Barbies, presaging her career in real estate development.

“I loved to play with my Legos to create unique towns and interesting communities,” Hasty says. “We traveled a lot, so I was also fascinated as a kid by hotels, how they evolved over time.”career in real estate development.

The restoration of Hotel Laguna will be watched closely as an indicator of the Honarkars’ vision for the town. The company aims to reopen its doors within the next few years, though that might be optimistic given the building’s deteriorating interior.

Residents can visit the company’s showroom to view recently completed properties as well as renderings of projects in the development process. That, Hasty says, is a way to enable Laguna Beach Co. to work with the community “to create spaces that all can enjoy—that’s our goal.”