Home Feature A Chat with the Owner of Dice House, a Board Game Store... 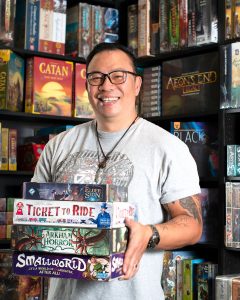 What are some differences between traditional board games and the ones you sell?
Ours tend to have a lot more depth. Traditional games like Monopoly and Yahtzee are pretty luck based. With the games I carry, they have dice and chance, but they involve more strategy. In a game like Catan, you’re bartering with your friends. There might be a story or you might get to play a character.

How did you get into this industry?
I was in college and my then-girlfriend wanted me to have a job. She walked by this store called The Game Castle (in Fullerton). She got me a job, and I worked there for 13 years.

What made you decide to open your own store?
Once the owner of The Game Castle decided to close shop, I thought, “Why don’t I just open up my own game store?” So I did that, which was a really dumb idea because it was in 2008, right during the recession. The first three or four years were pretty rough, but we survived. They say if you can survive the first few years, you’re OK. The whole thing is building a community.

Are people playing board games more often now?
Definitely. I have a very loyal community of customers here, and that’s what they’ve been doing. They were playing games before (the pandemic), and now they’re like, “Well, it’s just an excuse to play more games.” One key thing is a lot of couples who are isolating have been coming in and buying out all of my two-player games.