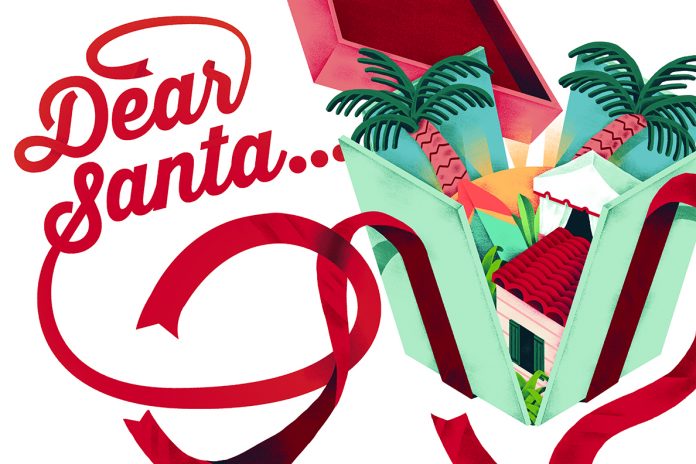 Send your letters to Santa here! What do you wish for in O.C. this year?

With the holidays upon us, we think it’s the perfect time to ask for exactly what we want—and we don’t mean rosette-glitter Louboutins or a top‑of‑the‑line 3D TV. We’ve spent the past month thinking of all the things we’re thankful for, including this beautiful county we live in, so it seems only fair that we get to kvetch a little, too.

Wish #1
A way to ride Splash Mountain without breaking the bank
When Disneyland opened in 1955, the price of admission was just a dollar. Combine that with the cost of an eight-ride ticket booklet, and it came to $2.50, or roughly $22 when adjusted for inflation. But now daily admission costs $99, and a Signature Plus annual pass with no blockout dates is $1,049. Yeah, we know reducing prices could lead to overcrowding. But we’re still going to complain.

Wish #2
Another sports team to call our own
Forget those crazy Los Angeles Angels of Anaheim or the L.A. Kiss that play in Anaheim—the Anaheim Ducks need a companion. In a county of transplants, wouldn’t a pro sports team bring us together? Here’s to the NFL’s (or NBA’s) future Seal Beach Seals, Huntington Beach Red Crabs, Costa Mesa Wild Foxes, or Irvine Coyotes.

Wish #3
An urban growth boundary
Marin County downzoned to protect open space and agriculture in 1972. Portland also instituted a growth boundary in the late 1970s. It’s a bit late for Orange County to limit sprawl by concentrating growth in city centers, but it sure would be nice to think this is as developed as we will get for the next 40 years. Of course, we’d like it without the Marin-like home prices!

Wish #4
“As a chef who’s also a consumer, I love that more Orange County restaurants are going truly authentic—authentic Chinese, authentic Indian, authentic Mexican. I want to see this trend continue. I call it the food of memory. It makes you remember your grandmother’s cooking or an unforgettable trip abroad.”—Cathy Pavlos, chef-owner of Lucca Cafe and Provenance

Wish #5
More small repertory theaters and comedy clubs
We appreciate the Irvine and Brea Improvs, and the Chance Theater in Anaheim Hills. More of that, please. If only the Upright Citizens Brigade would open its third SoCal outpost in Santa Ana.

Wishes #6-9
The Future We Want Now
These advancements in travel might never come to fruition, but we can dream.

High-Speed Rail
France, Germany, and Japan already have commercial trains that travel as fast as 200 mph. Imagine zooming from John Wayne Airport to LAX in less than 15 minutes!

Better Public Transit
Light rail? A subway system? Uber‑esque party buses? We’re not sure what the county has up its sleeve, but we hope we can someday entertain the thought of getting to the Metrolink station in a timely fashion without a car.

Self-Driving Cars
Companies such as Google and Tesla Motors will have to work out the kinks and get these cars street‑legal, but the day we can check emails or nap in our sedans as they drive us to work is a day that can’t come soon enough.

Protected Bike Lanes
Let’s be real: Most of O.C. is not bicycle friendly. By introducing more protected lanes, commuting on two wheels would be much safer, and more folks would try it.

Wishes #10-13
Beach Upgrades
We already have awesome surf and gorgeous weather. How about a few extras?

A few of our public beaches have decent restrooms. The rest seem like closet-sized petri dishes. A rehab is overdue.

Sure we could walk all the way back to the parking lot, but it’d be great if licensed food and drink vendors (or beach butlers) could swing by our umbrellas.

Some beach parking lots can be total nightmares. Perhaps nearby structures with shuttle services are in order?

Wish #14
Restaurants that have something other than salad as a vegetarian option
While O.C. chefs recently have added more diverse selections to their menus, we still have a long way to go before we catch up to other major metro areas in terms of veg-friendly fare. All we are saying is give tofu a chance.

Wish #15
An old-fashioned drive-in
There are 393 drive-in movie theaters still operating nationwide, according to the United Drive-In Theatre Owners Association, but only 17 are in California. And none of those are in our fair rectangle of the state. We think the Great Park is the perfect locale to set up a movie screen. You build it; we’ll drive there.

Wish #16
“My wish would be for thoughtful urban planning that works. I want to see city planners work together with the private sector to help our cities achieve their highest potential. There are individuals and organizations with vision who can make O.C. even more of an incredible oasis than it already is.”—Steve Jones, owner of real estate development company Better Shelter

Wish #17
More integrated neighborhoods
Wouldn’t it be great if Orange County’s neighborhoods were as diverse as its restaurant scene? The urban development happening in Downtown Santa Ana, Irvine, and residential areas around South Coast Metro is a good start. We need more of that in our other residential communities so we can see people of all backgrounds living side by side.

Wish #18
A cute, walkable downtown in every city
We label them “old towns”—the charming commercial streets of Orange, Fullerton, Seal Beach, and a few other cities that have shops, restaurants, and other businesses housed in buildings from the early 20th century. They’re a draw all right—look at Santa Ana’s rejuvenation. How about rehabilitating the ol’ beauties in every city to reflect each town’s personality and population?

Wish #19
More places to see indie and foreign flicks
We have a lot of choices when it comes to entertainment, but we could use some additional art-house movie theaters. We can find blockbusters at any nearby multiplex, but sometimes we’re in the mood to see the latest Noah Baumbach film on the big screen.

Wish #20
Friendly faces on the toll roads
A once-famous Orange County newspaper columnist went through some life changes and ended up as a booth attendant on a local toll road. His was a fascinating story of success followed by struggle and, eventually, redemption. Our FasTrak doesn’t have a story, nor does the self-checkout computer at Albertsons. We miss the human connection during those mundane transactions, and our device’s plaintive chirp reminds us daily that something valuable has been lost.

Wishes #21-24
A Greater Great Park
Where did that $200 million go? We’ve got the balloon, the carousel, the farmers market … and not much else. Here’s what we’d like to see.

It’s great to have food trucks stop by, but a permanent destination cafe would be nice.

Dance lessons and culinary workshops are a blast. More concerts and outdoor plays would be appreciated.
Wish #25
Wages that correspond to real estate prices
Everyone wants to live in Orange County. But these days it seems like you have to strike it rich just to own the smallest bit of property in most neighborhoods. The average salary of a registered nurse in O.C. is $64,000 (lower than in San Francisco, Los Angeles, New York City, Chicago, and Dallas). The average home price? $628,000 (lower than San Francisco, but higher than the other cities mentioned). Here’s hoping you’ve got a rich and generous aunt.

Wish #27
More of the fun, family‑oriented vibe at Fashion Island
How we used to love watching kids run through the pop-up water fountain in front of what then was Macy’s. The upscale redesign of the fountains and shops after the Great Recession was great for luxury shoppers, but we do miss the casual atmosphere that once drew parents and children just looking for a good time.

Wish #28
One-stop grocery shopping
Typical Saturday: a Portola espresso to focus the mind, then on to the farmers market, Bristol Farms, Trader Joe’s, either Santa Monica Seafood or Celestino’s Meats—and Hi-Time Wine Cellars for a schlep-fatigue Rx. A massive one-stop food and drink complex in O.C. is a dream. Do you hear us, Mario Batali? Dean & DeLuca promised in 2009, then bailed. Bring us your Eataly. Please. We want our weekends back.