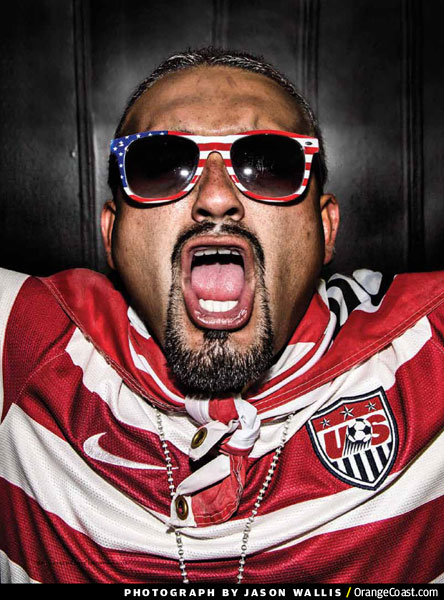 When the U.S. men’s soccer team takes the field June 16 for its 2014 FIFA World Cup opener against Ghana, one of the loudest concentrations of American supporters not at the stadium in Natal, Brazil, will be 6,000 miles away—in an unassuming commercial building about 1½ miles north of Santa Ana’s Civic Center.

The Olde Ship pub on West 17th Street will have all 10 of its high-
definition TVs tuned to the game, offering a haven for the soccer fan who’d rather cheer on the national team in the company of scores of like-minded people—and with a selection of British ales on tap—than sit at home alone with a remote control.

“The appeal is the atmosphere, the camaraderie,” says amiable pub owner Simon Collier, a native of the London suburb of Epsom, Surrey.

The Olde Ship is the unofficial headquarters of the Orange County chapter of American Outlaws, the largest of the official U.S. team supporters’ clubs. The crowd crammed into the pub for the 2010 World Cup tournament game between the U.S. and England was “just absolutely mental—like a Bangladesh train,” Collier recalls.

“We’ve tried other bars,” says chapter President Blaine Jenks. “But if the NBA finals and a U.S. soccer game were on at the same time, they’d show the NBA game. Soccer takes precedence at the Olde Ship.”

And don’t be surprised if a Swagger Bus operated by Dave “Dabbles” Riddle pulls into the parking lot to disgorge fans from as far afield as San Diego. Riddle has been bringing his bus—or, as he calls it, the “rolling pub”—to the Olde Ship for domestic and international soccer matches since the last World Cup.

Says Collier, using the proper English term for the sport: “We’ve come to be known as the pub in Orange County to watch football.”

That wasn’t the plan back in 2000 when Collier’s father took over what had been Hankey’s bar. Doug Collier had opened the original Olde Ship in Fullerton in 1993 as a replica of a traditional, cozy British “local” and had the same thing in mind for the new location: dark wood paneling, partitions, railway station memorabilia, and a framed copy of the Titantic passenger list. “He hated televisions,” Simon Collier recalls.

But after some customers lamented there wasn’t anywhere in the area to watch televised soccer in a communal fashion, Collier hoisted two screens above the bar. In the early days, attendance was spotty—“There might be only five or six lads in here,” he says. But gradually, the fans and the screens multiplied.

These days, the Olde Ship draws followers of the English Premier League, one of the world’s finest, and is packed even for league games that kick off as early as 4 a.m. Pacific coast time—too early to serve alcohol, but the pub is happy to provide breakfast from its full menu of British delicacies, including baked beans and bangers.

Collier claims it all happened through word of mouth, but there’s been some savvy marketing along the way. The Olde Ship has been named an official pub of U.S. Soccer and Major League Soccer’s L.A. Galaxy team, and it regularly mixes the sport with promotions for such products as the Manchester United-sponsored Casillero del Diablo red wine. It also has avoided being branded to any one English soccer club, preferring a more ecumenical approach.

“They’re always doing stuff at the Olde Ship,” says Riddle, who remembers when Collier obtained a block of tickets for pub regulars to attend the Galaxy’s July 2012 home exhibition match against England’s Tottenham Hotspur. Riddle recalls that fans of Tottenham’s archrival Arsenal “came to the game just to give the Tottenham fans a hard time.”

As soccer and fan interest continue their explosive growth in the U.S., pubs have become a vital part of efforts by MLS teams to build a fan community. The Seattle Sounders, known for their rabid support, have no fewer than 17 official pubs, from which the more sober fans emerge on home game days to take part in the traditional pregame march to the stadium. Comedian Drew Carey, a co-owner of the team, has shown up in pubs to buy rounds of beer for Sounders supporters.

The American Outlaws’ Jenks, a 26-year-old Santa Ana resident, believes soccer fans “have to engage [socially] a lot more than in other sports. … There’s more of a community when you’re with other supporters.” And a pub is the place where, short of actually being at a game, they can sing, cheer, and emote to their heart’s content.

Doug Collier died in 2006—on the 13th anniversary of the opening of the Fullerton Olde Ship, before the Santa Ana location’s full incarnation as a soccer pub. Simon Collier believes he would be proud of how it has turned out. “He was a businessman,” his son notes. “You just do what works.”

A Geo-Specific Guide to O.C. World Cup Watching
The faithful from many countries will congregate for passionate worship around TVs in various Orange County restaurants. Here are seven we recommend.
By Christopher Smith

Argentina
Puerto Madero
1225 W. 17th St., Santa Ana, 714‑547‑5900, puertomaderomarket.com
Enter this airy market/meat-centric lunch counter and the decor screams “goooooooal.” Bright flags line the walls, as do game schedules plastered below three sizable flat screens. Gotta-trys from the sports grub menu include the thin-sliced rib-eye steak and ham chivito, and the mild, chewy sausage choripan; both are savory and sizeable sandwiches ($7). The 10 tables fill up on match days, and when Argentina scores—a likelihood with Lionel Messi pacing a potent offense—the proper response will be cheerful abandon.

Belgium
Brussels Bistro
222 Forest Ave., Laguna Beach, 949-376-7955, brusselsbistro.com
Little seems to ail a promising young Belgian squad headed to Brazil. Meantime, in Laguna, ales themselves are the payoff, from flights of four tasting shots ($12) to an array of Belgian trappists and saisons ($6 to $13). The bistro is a hip den lined with booths and a dozen tables for two. The owners will project the World Cup games on a 6-by-8-foot screen. Crowning the menu are lovely, broth-y pots of mussels ($26) with Belgian fries and dipping sauces. Even an appetizer portion ($14) is plenty. Order it with beer and cream sauce ($2 extra).

Colombia
Donde Adela
1707 W. Chapman Ave., Orange, 714‑940‑1701, comidacolombianaoc.com
This cheery spot—a suitable theme song might be “Where Everybody Knows Tu Nombre”—hosts the county’s companionable, if tiny, Colombian population. Beyond futbol, the lure is hearty breakfasts ($6.75 to $10)—or sizable, meat-driven plates ($8 to $15). If it’s Friday, zero in on the Bogota specialty, ajiaco ($10), the most addictive chicken soup not made by a Jewish grandmother. Try a glass of aguapanela ($3), a nonfizzy sugar cane drink cut by an earthy note.

Germany
Phoenix Club
1340 S. Sanderson Ave., Anaheim, 714‑563‑4166, thephoenixclub.com
The once-private club now is open to all and is the county’s No. 1 guaranteed payoff for a fun World Cup experience. Two reasons: Germany is always a championship contender; and copious beer consumption leads to nonstop singing. Drink and grub are basic: eight German brews on tap; bratwurst plates with German potato salad ($13); massive pork schnitzel plates ($16 to $19). The Grand Ballroom seats 400, but come at least half an hour before match time to ensure entry.

Mexico
Salmeron’s El Tapatio
1214 E. Pomona St., Santa Ana, 714‑835‑4264
Passion for the national squad is never lacking, but hope often is, and the county’s multitude of Mexican enclaves will fill with jittery partisans. The key is finding a sizable room with a bar. This 50-year-old working-class hideaway has that, plus a deep menu capped with steaming bowls of menudo or pozole ($6.25); mariscos cocktails with shrimp, octopus, or abalone ($12); tender barbacoa in a fiery-looking, but mellow-tasting red sauce ($9). Viva Mexico! … for as long as the good times last.

Photograph by Jason Wallis
This article originally appeared in the June 2014 issue.