“The Ezra Klein Show”
The Irvine native and New York Times columnist is a master conversationalist, whose podcast explores such subjects as the future of the Republican party with a GOP pollster; being “kind in a cruel world” with acclaimed fiction writer George Saunders; and tech burnout in the digital age with a computer scientist.

“This Filipino American Life”
Created and hosted by two UC Irvine alums and two of their friends, the show features real conversations among the hosts themselves and with guests, such as the Food Network’s “Chopped Sweets” winner; a trans woman filmmaker; and a death doula.

“The Ron Burgundy Podcast”
Irvine native Will Ferrell’s D-list celebrity/newscaster character couldn’t be less informative or more self-delusional as host of his own show, with the goal of “doing the only thing I know how to do, speak from my fart—dammit, I meant to say ‘heart.’”

“Historians on Housewives”
A trio of UC Irvine scholars use Bravo reality TV shows such as “The Real Housewives of Orange County,” “Project Runway,” and “Southern Charm” as a means to explore race, status, gender, and other issues and to talk about the methods historians use to study the past.

“Catalyst: A Creative Industries Podcast”
Chapman University students create lively, half-hour segments on topics such as portraying Ariel, Cinderella, and other characters as “party princess” entertainers at children’s parties; tenacity in the music industry; and creativity in the yoga business. 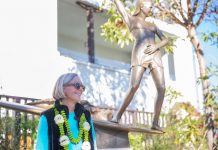 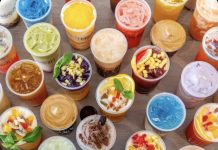 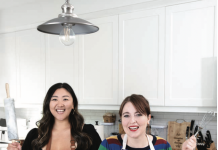