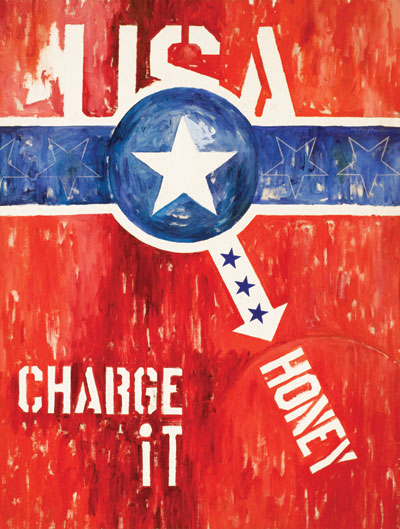 Background
Kerciu was arrested in 1963 for paintings that used the Confederate flag to excoriate segregationists at the University of Mississippi, where he taught art. He later became an art professor at Cal State Fullerton, helping establish a print collection that includes pieces by Warhol, Lichtenstein, and Rauschenberg. He also served as board president of the Laguna Art Museum.

Creation
After moving to Southern California, Kerciu worked on the “USA Series.” In the Mississippi paintings and the “USA Series,” Kerciu began blending new realism, pop art, and social commentary. This painting was made with acrylics on Masonite; he also incorporated printmaking techniques. Kerciu has worked in stained glass and sculpture, too.

Inspiration
The sociopolitical upheaval of the early ’60s influenced Kerciu: “The Kennedys, President Johnson, and the civil rights movement all figured into this body of work.” This piece commented on overspending and misuse of credit. Now retired, Kerciu said helping to select works for his retrospective provided him “an insightful look at a long artistic career.”

>>Online Only
Browse a gallery of Kerciu’s art here